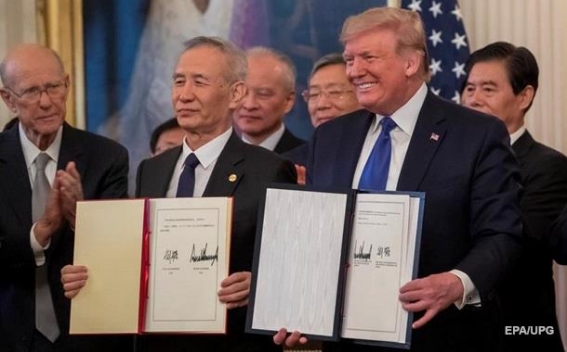 Donald Trump and Chinese Vice Premier Liu He signed an initial "Phase One" trade agreement Wednesday, freezing a 20-month trade war between Washington and Beijing and opening the door to a more-substantial "Phase Two" deal, The Hill reports.

The deal, text of which was not released ahead of the signing, is said to include commitments by China to buy $200 billion of U.S. goods, including as much as $50 billion in agricultural products over two years.

"Today we take a momentous step, one that has never been taken before with China, toward a future of fair and reciprocal trade as we sign Phase One of the historic trade deal between the United States and China," Trump said.

"Together we are righting the wrongs of the past and delivering a future of economic justice and security for American workers, farmers and families."

Businesses are eagerly awaiting the text of the agreement, with trade watchers raising concerns about enforceability and the extent of China’s commitment.

Speaking to CNBC Wednesday morning, Treasury Secretary Steven Mnuchin said that Trump could reimpose tariffs in the event that China reneges on its commitments.