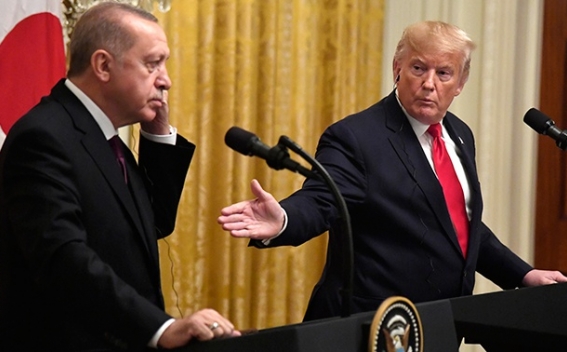 President Trump on Wednesday spoke with Turkish President Recep Tayyip Erdogan about simmering tensions across the Middle East, according to the White House, The Hill reports.

A White House spokesman said the two leaders discussed protests in Iran, where citizens have flooded the streets to express frustration with leaders in Tehran, as well as the Iranians shooting down a Ukrainian International Airlines passenger jet.

The U.S. and Iran appeared to step back last week from the brink of military conflict, tamping down tensions that spiked after Trump approved a strike that killed top Iranian gen. Qassem Soleimani. Tehran responded to Soleimani's death by firing missiles at Iraqi bases housing U.S. troops, but there were no casualties.

Trump and Erdogan also discussed conflicts in Libya and Syria, according to the White House. Both countries are grappling with faltering ceasefires.

Trump last year announced the U.S. would pull troops out of northern Syria, paving the way for a Turkish offensive in the region that targeted the American-allied Kurdish forces that Ankara considers terrorists.

The decision sparked a furor in Congress as Democrats and Republicans accused Trump of giving a "green light" to Turkey to slaughter the Kurds. Trump denied he had done so and later sent Vice President Mike Pence to broker a ceasefire.