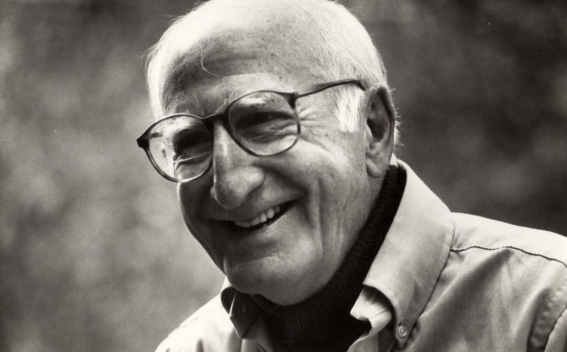 Ben Haig Bagdikian, a prominent American media critic, a professional journalist and educator, professor and Honorary Dean at the University of California journalism school, in the city of Berkeley, most renowned journalistic Pulitzer Prize winner, president of the Washington-based American Washington Post Bureau, later in the same local newspaper chief editor of the domestic news, and later, international correspondent.

Ben-Hur Haig Bagdikian was born in Marash, Western Armenia, on January 30, 1920. A survivor of the Armenian Genocide, his family moved to the United States, Massachusetts. His father was a pastor at several Armenian churches in the Boston area. He had taken courses at the Harvard Divinity School and had been ordained. His mother was diagnosed with tuberculosis almost immediately after arrival in Boston and died three years later, after spending some time hospitalized in sanitariums.

After graduating from the University of Clark in 1941, Ben began working in the “Morning Union” newspaper. During the WW II when the Japanese attacked the Pearl Harbor, he was recruited to the US Air Force to serve until the end of the war.

His journalistic career began after the war. Throughout his lifetime Ben was fighting for justice. He became a crypto prisoner for disclosing inhuman jail conditions in Pennsylvania. In 1956 he joined the Israeli tank crew to write about the Suez crisis. In the 1960s, Baghdikyan lived with the ordinary people in the South of America to cover civil rights. In the 1960s Baghdikyan was employed in the prestigious American Washington Post. In the 1970s he was the chief editor of the periodical. Ben Baghdikian's reputation was growing in those years.

It is he who initiated a series of scandalous publications in the Washington Post entitled "Pentagon Documents" about the Vietnam War. Those confidential documents for use by the US Department of Defense documented that the administration of the US President Lyndon Johnson intentionally escalated the war in Vietnam. With the release of these documents, a large anti-war wave broke out that led to the end of Vietnam War in 1973.

Throughout his career, Baghdikyan fought against newspapers that disseminated fake news. In 1975, when the newspapers hired by the Turks began to spread false stories about the "Armenian Cause", Baghdikyan directed all his professional potential and made the editor of one of those periodicals publicly apologize for the fake news they published.

In addition to the articles, Ben authored a number of books. One of his most popular books, “The Media Monopoly”, narrates how several US companies took control of most of the media.

Remarkable are also his "I am Armenian", "Ben Bagdikyan, journalist for justice" books, where he tells about the Armenian Genocide and his life journey.

Ben Baghdikyan died on March 11, 2016, at the age of 96. Besides the prestigious Pulitzer and Peabody prizes, Bagdigian also won the "Most Popular Critic in the Field of Journalism", as well as the James Madison Award.

Ben Baghdikian's appeal to media outlets is remarkable. "Never forget that you are responsible in front of the people. You don’t work for those who pay, neither for your sources, editors, friends, nor for your careers. You work for your audience.”