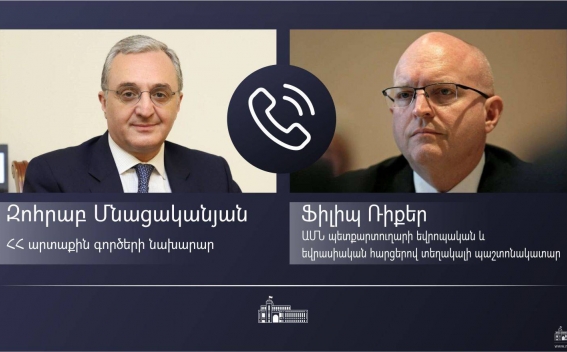 The interlocutors exchanged views on the issues caused by COVID-19 and the steps being undertaken at the national level towards addressing them, emphasizing the importance of international solidarity and cooperation in the fight against the pandemic. In this regard, Minister Mnatsakanyan expressed his gratitude to the US Government for the financial support provided to Armenia.

Zohrab Mnatsakanyan and Philip Reeker touched upon a number of issues of bilateral agenda. The sides highlighted the consistency of interactions within the framework of the Armenia-U.S. strategic dialogue and Armenia-U.S. Council on Trade and Investment (TIFA), both through VTCs and in person meetings after the pandemic. The implementation of agreements reached within the above mentioned formats was also discussed.

The Foreign Minister and the Acting Assistant Secretary exchanged views on the reforms carried out by the Government of Armenia, which includes the fight against corruption, spheres of justice and law enforcement. In this context, Minister Mnatsakanyan highly appreciated the continuous support of the United States.

During the conversation the sides touched upon the cooperation on readmission issues. The U.S. Acting Assistant Secretary informed that by commending Armenia’s steps in that regard, the U.S. Homeland Security Department removed Armenia from the list of “at risk of non-compliance” countries and included in the list of “cooperative” countries.

In the context of the cooperation within the “Religious Freedom Alliance”, Minister Mnatsakanyan presented the programs initiated by Armenia towards preserving the historical and cultural heritage of religious and ethnic minorities in the Middle East.

The Foreign Minister of Armenia and the US Acting Assistant Secretary for European and Eurasian Affairs exchanged views on the recent developments in the Nagorno-Karabakh peace process.