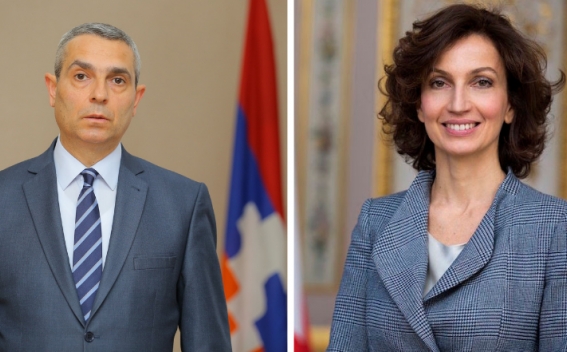 On November 19, Foreign Minister of the Republic of Artsakh Masis Mayilian sent a letter to the UNESCO Director-General Audrey Azoulay regarding the facts of desecration and acts of vandalism committed by the Azerbaijani side against Armenian historical, religious and cultural monuments.
The letter states that as a result of the military aggression launched by Azerbaijan on September 27 against the Republic of Artsakh with the support of Turkey significant part of the territory of Artsakh, where numerous cultural monuments of Armenian heritage are located, fell under the military occupation of Azerbaijan.
The Foreign Minister drew attention to the fact that “videos and photos are distributed on the Internet that show inscriptions in Azerbaijani on the walls of the Church of the Holy Savior in the city of Shushi, individual sculptures that make up the composite part of the Church are destroyed, and artifacts located directly in the Church are damaged. During the period of active military operations, the Azerbaijani armed forces twice deliberately attacked the Church from an unmanned aerial vehicle. The attack caused serious damage to the Church. During the second strike, journalists who were in the Church to document the consequences of the first strike were injured”.
The letter underlines that systematic denial of the existence of the Armenian historical and cultural heritage and its destruction have long been the norm in Azerbaijan and are part of the state policy of inculcating hatred and xenophobia towards Armenians. In connection with the threat of destruction of cultural monuments of Armenian heritage located in the Republic of Artsakh and under the control of Azerbaijan, Minister Mayilian stressed the necessity of taking effective measures on behalf of UNESCO to ensure the protection of Armenian historical, cultural and religious monuments and to guarantee that Azerbaijan fulfills its obligations to preserve the cultural heritage of other peoples.
Հայերեն На русском