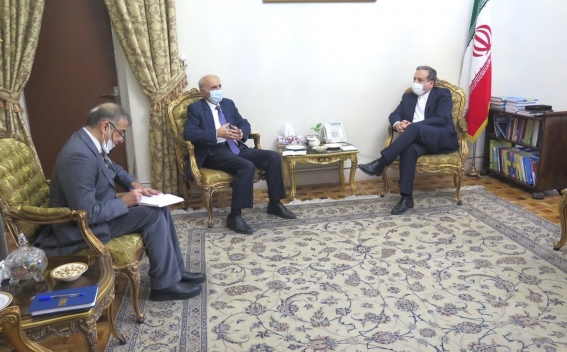 On November 22, Armenian Ambassador, Artashes Toumanian, met with Seyyed Abbas Araqchi, the Iranian Deputy Foreign Minister for Political Affairs.
During the meeting Mr.Toumanian briefed Mr. Araqchi regarding the situation and recent developments in Armenia and Artsakh after the adoption of the trilateral peace deal statement signed by the leaders of Armenia, Azerbaijan and Russia.
The interlocutors exchanged views on the settlement of NKR conflict, the issues of post-war procedures, the regional and trans-regional actors’ participation and their future possible roles.
The direction and aspects of cooperation based on mutual interest and accordance between Armenia and Iran, particularly under the existing complicated circumstances were discussed. Both sides stressed on maintaining and fostering the permanent mutual relations and consultative contacts between the circles and authorities in both levels of State and society, meanwhile to put in a more active grounds the current undergoing joint activities and projects.
Հայերեն