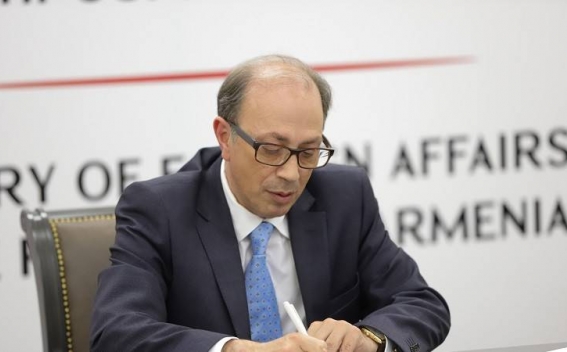 The interlocutors exchanged views on the possibilities of resuming the peace process and the addressing of core issues of the settlement of the Nagorno-Karabakh conflict within its framework. In this regard, Minister Aivazian noted that the conflict is based on the right of the people of Artsakh to self-determination and security, and the consequences of the use of force cannot be considered as a resolution to the conflict.

In this context, Minister Aivazian reiterated the commitment of the Armenian side to continue the efforts for a peaceful settlement under the auspices of the OSCE Minsk Group Co-Chairmanship, as the only internationally mandated format for mediation to the settlement of the Nagorno-Karabakh conflict.

Foreign Minister of Armenia Ara Aivazian and the OSCE Minsk Group Co-Chairs exchanged views on addressing humanitarian issues, enshrined also in the November 9 trilateral statement. Minister Aivazian particularly emphasized the imperative for the immediate repatriation of the prisoners of war, captured civilians and other detainees, emphasizing the unacceptability of Azerbaijan's destructive policy in this issue.