Armen Sarkissian: The Recognition And Condemnation Of The Armenian Genocide Are Necessary To Ensure Lasting Peace And Stability In Our Region 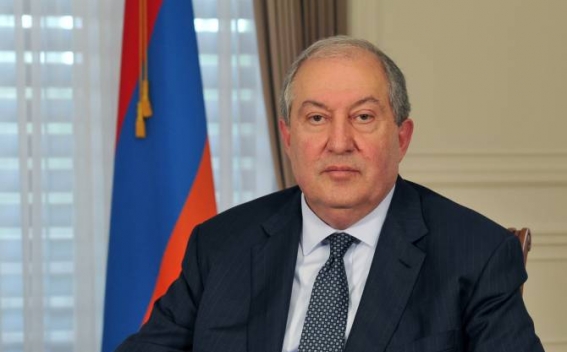 Armenia’s President Armen Sarkissian on Saturday issued a message on the occasion of the 106th anniversary of the Armenian Genocide. The president's office informed Armenian News-NEWS.am about this. The message reads as follows:

Dear compatriots in Armenia, Artsakh and the Diaspora,

Today, we commemorate the victims of the Armenian Genocide in Ottoman Turkey in 1915.

The pain of the immense human and territorial loss suffered by the Armenian people more than one hundred years ago still echoes in our hearts, reminding us that the right of the Armenian people to live peacefully and safely, and develop in their native land was violated: first in the Ottoman Empire, and today in Artsakh.

Unfortunately, in international and regional politics, the Armenian Genocide, and the Armenian Question in general, are often used by some people as a means to achieve different goals.

However, the world must realize that the policy of silencing the crime of the Armenian Genocide, leaving it in the past, and especially denying it, has long since exhausted itself; genocide is a crime against all humanity, and indifference and impunity give birth to new crimes. Such crimes and their authors should be called by their names; the crime and the perpetrator should be condemned.

Today, the events prove once again that the recognition and condemnation of the Armenian Genocide are necessary to ensure lasting peace and stability in our region.

The Armenian Genocide is the result of a policy of xenophobia, the most recent manifestation of which was the Azerbaijani-Turkish war against Artsakh.

On the 106th anniversary of the Armenian Genocide, while we are still recovering from the severe blow, the aspiration to have a strong, competitive, and reasonable Armenia must be rooted in us. We can and must straighten our backs, stand firm on our own soil, and stay true to ourselves. Violations against our national and moral values, and against our identity are unequivocally unacceptable.

As a united people and state, we must be able to be part of the developments taking place in the world today, without retreating from our memory and just demands.

Bowing to the memory of our holy martyrs who fell victim to the Genocide, as the President of the Republic, I want to say with confidence that with joint efforts of all Armenians we will achieve our national goals, and make Armenia the country of our dreams.

God bless us all.