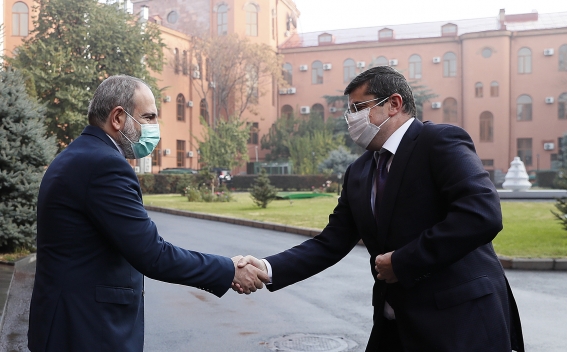 In his speech Nikol Pashinyan said,

"You are welcome. I am glad to see you in the capital of the Republic of Armenia.

The first anniversary of the end of the 44-Day War is approaching. Of course, during this period that work never stopped, but on the occasion of the anniversary I think that it’s important to analyze the works we have done during this period and assess the situation. And today we will discuss these issues during our meeting.

It’s important to record that during this period the Government of Artsakh, together with the Armenian Government, has carried out many concrete activities for restoring the normal life in Artsakh. Of course, we don’t think that what has been done is satisfactory, and we surely must continue the works in this direction, by replacing the assistance programs, as we have stated many times, with development programs.

Of course, it’s also important that we hold discussions about our future vision on the settlement of the Nagorno Karabakh conflict, and we do that also at a working level. We attach importance to the full resumption of the negotiation process within the OSCE Minsk Group Co-Chairmanship, where, as the Co-Chairs have repeatedly emphasized, the final and comprehensive settlement of the Nagorno Karabakh conflict and the clarification of the status of Nagorno Karabakh, will take place based on the famous principles, including the peoples’ right to self-determination.

All these issues are always on our joint working agenda, and today will hold a detailed discussion on these topics. You are welcome once again, I am glad to see you".

Arayik Harutyunyan said in his turn,

First, I would like to thank you for the reception. In fact, already a year has passed, and what have we managed to do and record? The first one is that we have not been deviated from the path of political solution of Artsakh issue, and we continue to retain Artsakh’s right to self-determination as a key political solution component, and the international players, including the OSCE Minsk Group continue acting as a mediator, and the agenda in terms of the solution of the Karabakh issue is based also on the peoples’ right to self-determination.

Secondly, I want to state that we already see the first results of the large-scale works, and we will hand at least 300 apartments to citizens only in Stepanakert withing a few days, by the yearend. The talk is about the newly-constructed apartments. Of course, part of the construction had kicked off befor ethe war, but in addition to this, we managed to start constructing thousands of apartments and will complete construction of at least 2500-3000 apartments by the end of the next year. First of all, within the framework of the funding provided by the Armenian Government to Artsakh - of course, the funding is not only for construction, but also for restoring normal life of Artsakh, for the implementation of social programs – and with the funds donated by the Hayastan All-Armenian Fund various housing and infrastructure programs are being implemented. In other words, the first 300 families will have their homes by the end of this year, until the New Year, which is the most important in terms of solving the demographic problem in Artsakh.

I would also like to thank you for the fact that the state budget of Armenia for 2022 reflects a large amount of money, which will also allow solving all the problems together with the money that will be collected at the expense of the recovering economy of Artsakh. In a short period of time, in 2-3 years, I am sure we will completely solve the housing and remaining infrastructure and social problems.

I would like to note that the various structures of the Republic of Armenia and the Republic of Artsakh cooperate quite actively, they promptly respond to all our questions. Any issue raised, whether social, infrastructural or something else, is solved. The natural life that exists in Artsakh today is mainly due to the money allocations by the Armenian Government and the attention, the daily work that takes place."