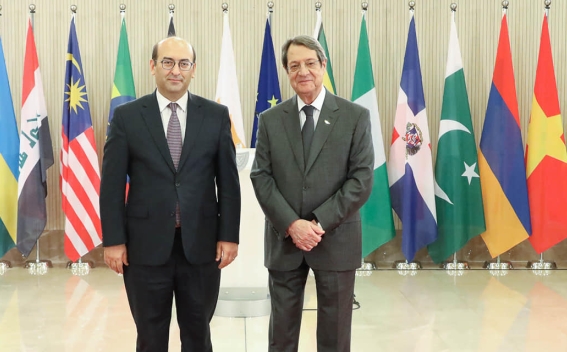 Armenia is planning to open a diplomatic office in Cyprus, Ambassador of Armenia to Cyprus Tigran Mkrtchyan said during the meeting with Chairman of the Board of Directors of Cyprus Broadcasting Corporation (CyBC) Michalis P. Michael.

According to Armenpress, the Ambassador of Armenia arrived in Cyprus on a first official visit.

Ambassador Mkrtchyan said that long-term close relations exist between Armenia and Cyprus. He expressed hoped that there will be an opportunity in the near future to mutually open diplomatic representations in Yerevan and Nicosia.

The Armenian Ambassador also touched upon the Cyprus-Armenia-Greece cooperation, stating that a number of meetings have taken place within the frames of this partnership, particularly in military, political and Diaspora fields, expressing hope for the further expansion of this collaboration.

He expressed gratitude to Cyprus for the support provided to Armenia.

In his turn Michalis P. Michael stated that efforts will be made to further expand and deepen the cooperation with Armenia, including the partnership in the fields of news and information, adding that CyBC is broadcasting daily radio programs specially for Cypriot-Armenians.