Delegation of Iraqi Union of National Minorities’ Organizations in Parliament 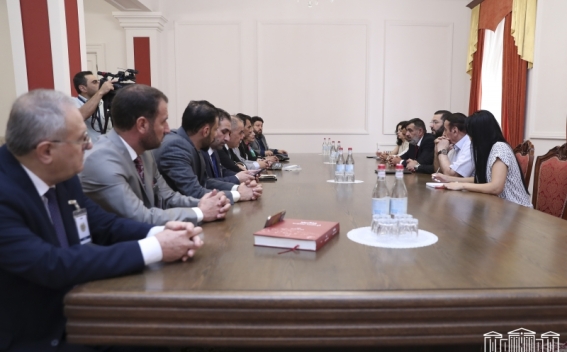 On August 4, the Head of the RA NA Armenia-Iraq Friendship Group Rustam Bakoyan met with the delegation of the Iraqi Union of the National Minorities’ Organizations, where the deputies of the national minorities of the Iraqi Parliament were. The RA NA deputy Knyaz Hasanov, the Consul General of the Republic of Armenia in Erbil Arshak Manukyan took part in the meeting.

Welcoming the guests in parliament, Rustam Bakoyan was interested in the national minorities living in Iraq, the problems and the challenges concerning them.

The RA NA deputy Knyaz Hasanov condemned the artillery bombing in Zakho resort of Kurdistan, as a consequence of which civilians suffered.

The Iraqi parliamentarians thanked the RA National Assembly for recognizing the genocide committed against the Yazidi people by the terrorist groupings on the territory of Iraq in 2014. They also expressed satisfaction to the parliamentarians for the support in the international organizations.

The guests presented in detail the structure of their parliament, touched upon the representation of the ethnic minorities.

The sides expressed readiness to further strengthen the ties between the two countries. In this context an agreement was reached for activating the parliamentary mutual visits.