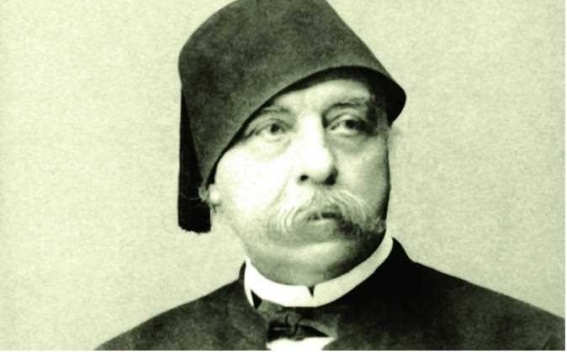 "Nubar Pasha is an Egyptian-Armenian politician, Christian and the first Prime Minister of Egypt. An Educated person, who fluently speaks a few languages, he is a genuine diplomat of the time," Brighouse and Epron encyclopedic dictionary of 1890 reads.

Nubar was born in  Smyrna (Izmir) in 1825. His father Mgrdich Melikyan was a descendant of  commander Nubar, an associate of legendary David-Bek. His mother was the sister of Boghos Bey Yusufyan, another native of Smyrna, who became a minister and the personal secretary of Muhammad Ali, the sovereign ruler of Egypt. It was due to his uncle that Nubar received a brilliant education in the prestigious educational institutions in Switzerland and France, and returning to Egypt, in 1845 he was appointed personal secretary of Abbas Pasha, governor of Egypt.

In the 1850s, he became one of the leading statesmen and politicians in Egypt. In 1850 the ruler of the country Abbas Pasha sent Nubar to London, where he defended the rights of Egypt and the family of Muhammad Ali against the claims of the Turkish sultan. Nubar successfully completed the assignment, for which he was made a Bey.

Undeniable is the contribution of Nubar to the construction of the Suez Canal, connecting the Red and Mediterranean Seas. In 1866, he went to Constantinople, where he managed to convince the Turkish Sultan of the Ottoman Empire not only to agree to the construction of the canal, but to persuade him to allocate a fabulous amount of money for the work. Pleased with Nubar Bey’s efforts, the ruler of Egypt, Ismail Pasha, instructed him to take over the completion of work on the Suez Canal. The technical challenges facing the builders of the canal were enormous... Noubar-Bey traveled to Paris to settle the controversial issues between Egypt and the French Canal Company. Upon return from Paris Nubar Bey took the office of the minister of public works and was made a pasha. Soon after he became the Minister of Foreign Affairs of Egypt.

He reached the top of his career in 1878 when appointed as prime minister of Egypt, the first time in the history of the country. He served as Prime Minister three times during his career. His first term was between August 1878 and 23 February 1879. His second term was served from 10 January 1884 to 9 June 1888. His final term was between 16 April 1894 and 12 November 1895. Among the prominent achievements of that period was the reform of the outdated judicial system.

British Controller-General of Egypt and the Suez Canal Zone Evelyn Baring, later Lord Cromer, wrote, "Nubar Pasha is the most interesting amongst modern Egyptian politicians, with intellect he is way up of his rivals."

Nubar Pasha was engaged both in the fate of the Armenian community of Egypt and of the entire Armenian diaspora. He assisted Armenian refugees from Turkey to Egypt, allocated funds for the publication of periodicals and for establishment of schools, organized the translation and publication of French translations of Armenian bibliographers, and others. In 1878, Nubar compiled his program on improving the condition of Armenians under the Turkish yoke and sent it to the Berlin Congress, which, however, was not presented to Congress.

Nubar Pasha died in Paris, on January 14, 1899. He was interred in the Armenian suburb of Cairo, Heliopolis.

He received highest awards and honorary titles for his merits for Egypt. Two streets (in Cairo and Alexandria), as well as one of the bridges across the Nile in Cairo, were named after the Nubara Pasha. His statue stands next to the National Opera House in Alexandria.