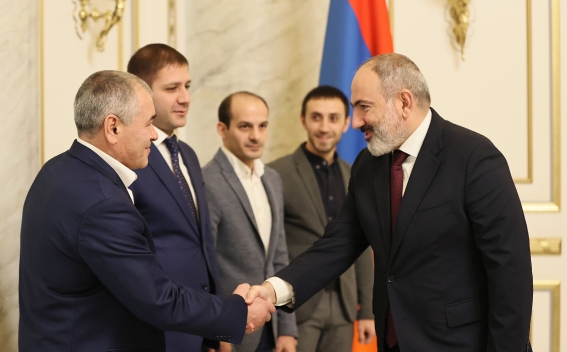 Prime Minister Nikol Pashinyan hosted the member of the Armenian national gymnastics team, the new world champion Artur Davtyan, the bronze medalist of the World Championship Harutyun Merdinyan, the President of the Gymnastics Federation Gagik Vanoyan and the head coach of the national team Hakob Serobyan.

In his speech, the Prime Minister noted. "Dear gentlemen, first of all I congratulate all of us and, first of all, of course Artur Davtyan, on the occasion of the historic victory and success. I also congratulate Mr. Merdinyan, because, as far as I understand, there are historical elements in your victory as well, I congratulate the federation, the coaching team.

I want to thank you all. It is clear that such success can be achieved in an environment where there is consolidation around talent first and only teamwork, and I want to emphasize this. I must also say that all of us, the Republic of Armenia, our country, the people, need such victories, and I think that such victories also deserve the attention of young people, children, who get great stimulus and interest in planning their future lives or simply engaging in sports.

I have to also emphasize with satisfaction that now I am even more happy that we have made a decision according to which we must build a new gymnastics school, which must be created from scratch and, as we have agreed, everything must meet modern standards. I must be honest, after this historic victory, I was curious about the situation of our 2019 reforms in terms of paying honorariums to accomplished athletes and what kind of relationship we have in this regard. Again, I must say with satisfaction that in this case the honorarium has clearly found its recipient and I also hope that it has helped in some way to get away from the daily grind and focus on the actual work.

Once again, I want to thank all of you, Mr. Davtyan, Mr. Merdinyan, the federation, the coaching team, for this historic achievement. I hope that such achievements will cease to be historical in the Republic of Armenia."

Gagik Vanoyan, the President of the Gymnastics Federation, thanked for the reception and noted. "I assure you, the meeting with the Head of the State will give us strength and energy to continue our activities, to do our work to the maximum to be able to keep the sports reputation of our country high in the future. Taking this opportunity, Mr. Prime Minister, let me also thank the government, Mr. Arayik Harutyunyan, Mr. Giloyan, because the federation always cooperates with the government. In recent years, this work has been raised to a better level and a better quality. Our athletes also feel the change year over year. As you mentioned, there are a lot of questions regarding the financial side, honorariums, and other issues that emerge in the process, and these questions always receive a maximally positive solution. All this contributes to being able to continue our work with greater enthusiasm."

Artur Davtyan and Harutyunyan Merdinyan shared their impressions of the World Championship and talked about upcoming programs, including those related to the Olympic Games.

A number of issues related to the further development of gymnastics were discussed at the meeting. In particular, it was mentioned that the new building of the artistic gymnastics school named after Hrant Shahinyan is being built with the Government funding, while the design work of the new building of the gymnastics school named after Albert Azaryan is in progress by the Yerevan Municipality. Both sports schools will be commissioned in 2025 and equipped with modern equipment.

The possibilities of holding the European Gymnastics Championship in our country and the work carried out in that direction were also discussed.

Karen Giloyan, Deputy Minister of Education, Science, Culture and Sport, reported that so far in 2022, Armenian athletes have won a total of 288 medals from various sports, 101 of which are gold.

Prime Minister Pashinyan noted that the government will continue to focus on the development of sports and on steps to improve infrastructure.