Johannes Hahn: I Want to Strengthen Cooperation With Armenia 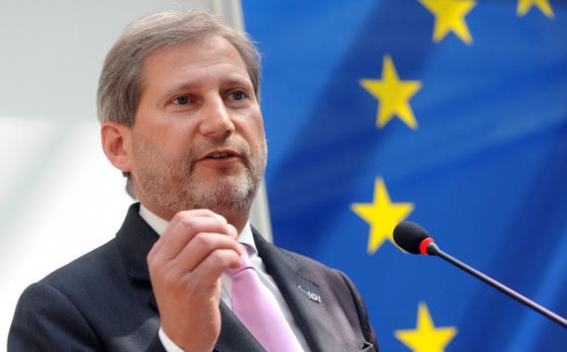 EU Commissioner for European Neighbourhood Policy and Enlargement Negotiations Johannes Hahn is in an official visit to Armenia. During his visit he will meet the RA President Serzh Sargsyan, Prime Minister Hovik Abrahamyan and the Armenian Foreign Minister Edward Nalbandian. Today, on March 18, Johannes Hahn has participated in the Euronest Parliamentary Assembly and has delivered a speech. The speech, as it is posted on the official website of the European Commission, reads as follows:

I'm delighted to be here at the fourth session of the Euronest Parliamentary Assembly, where I also represent High Representative Federica Mogherini. I attach high importance to your work as the parliamentary dimension of the Eastern Partnership. I am therefore particularly pleased to have the opportunity today to discuss the review of the ENP with you so soon after the launch of our joint consultation paper.

European Union key partner for all countries in our neighbourhood

Let me start by underlining that the European Union wants to be a key partner for all countries in our neighbourhood, while defending their right to choose their own way forward.

The European Neighbourhood Policy was created to build new partnerships with the EU’s direct neighbours, based on shared values, stability and prosperity. Those fundamental objectives remain as valid today as they were when the ENP was launched more than ten years ago; indeed, they are now more important than ever.

But the situation in Europe's neighbourhood has changed dramatically since the ENP has been in place. Growing challenges to a number of Eastern Partnership countries, from the crisis in Georgia in 2008 to the on-going conflict in Ukraine, have been caused by an increasingly assertive Russian foreign policy. This has also exacerbated divisions between Russia and the EU.

There are ongoing crises in the South as well. Syria has been afflicted by civil war since 2011, Libya is currently in conflict. There is a complex transition in Egypt. The Middle East Peace Process is stalled.

This all underlines the clear need to review the assumptions on which the policy is based. We need to ensure the ENP can, in the future, support more effectively the development of an area of shared stability, security and prosperity with our partners.

A far-reaching and necessary review

That is why President Juncker asked me, in close co-operation with High Representative Mogherini, to carry out a far-reaching review of this policy in the first twelve months of my mandate.

The consultation paper we have just published will form the basis of a public consultation over the next 4 months. I encourage you to express your views on the policy and on its future path. The dialogue you have with your national governments and the EU institutions will be an invaluable contribution to the ENP review and to the implementation and future development of the Eastern Partnership.

We want to hear from all of our neighbours, and that includes hearing your views and learning from your experiences at all levels and from all stakeholders ranging from government and civil society organisations to business and academia. We want to discuss how the design and implementation of the ENP can be better adapted to your interests and to ours.

We will meet southern partners' Foreign Ministers in Barcelona on 13 April and Eastern Partnership Foreign Ministers on 20 April in Luxembourg. The Eastern Partnership Summit itself in Riga on 21-22 May will of course also be an occasion when both partners and member states will be able to express their views at the highest level. And we will then come forward with proposals in the course of the autumn.

There has already been a lot of informal consultation. Many member states and partners, and indeed some of you, have already given views. We would appreciate your views on four key points:

First: what can we do increase the scope for differentiation in the way we work with our partners? We need to do more to recognise that our partners are very diverse. Not just different east and south, but different within the east and within the south.

Some including Ukraine, Georgia and Moldova want closer integration with us, and in these cases we need to reflect on what further steps are possible to ensure that they get all the support they need to undertake the political and economic reforms that are necessary to progressively bring them into the European mainstream. Ukraine has taken some important first steps to reform in difficult circumstances. However, further progress on genuine reforms is urgent in the areas such as rule of law, including timely entering into force of the law on public prosecution and fight against corruption, improved public administration, economic development, energy sector reform and constitutional reform.

I encourage Georgia to implement the Association Agreement in a spirit of inclusiveness and consultation with relevant stakeholders. Likewise, we expect Moldova to focus on swift implementation of its Association Agreement. I strongly encourage Moldova to step up its efforts on key reforms, especially in the justice, financial and media sectors, public administration reform and on prevention and fight against corruption.

Let me stress that Georgia, Moldova and Ukraine are not alone in the implementation and reform process. Important EU assistance is linked with the current reform agenda and will be equally linked to the needs arising from Association Agreements implementation.

I want to strengthen cooperation with Armenia and Azerbaijan respectively. We have been exploring with Armenia the possible scope of our future bilateral cooperation bearing in mind Armenia's other international commitments. We're prepared to further support Armenia in areas such as good governance, human rights, fighting corruption, reforming the judiciary, implementation of the mobility partnership and the visa facilitation and readmission agreements in force with the EU. Moreover, we will continue to promote and support civil society in Armenia. We hope our recently concluded exploratory talks will lead to negotiations on a new legal basis and scope of future wide-ranging EU-Armenia relations.

Interests and values should go hand in hand when developing our bilateral relations with Azerbaijan. We look forward to receiving Baku's ideas in this regard. We see many advantages in renewing our bilateral relations on the basis of a new comprehensive legally binding bilateral agreement, addressing all aspects of our relations, including trade, human rights and energy cooperation. I should note that success of Southern Gas Corridor also depends on a stable, secure and prosperous Azerbaijan.

As regards Belarus, I appreciate its balanced stance on Ukraine and the EU is ready to build on the positive steps Minsk has recently taken with regards to relations with the EU. Belarus’ parliamentarians are not with us at the Euronest. Yet, I hope that one day it will be possible for Belarusians to join your Assembly. I know that you are keeping the door open for representatives of a democratic Belarusian parliament. More generally, and both in the East and the South, we need to work out how to work with the neighbours of our partners – without giving them a veto over any partner's engagement with the EU.

The second key point is ownership. We will never get the best from this policy while it is seen as something more or less imposed by Europe, rather than a partnership actively chosen by the other side. The new ENP must reflect the views and experience of our partners. It must not be condescending, patronising or preaching. We should develop a real partnership of equals based on shared interests, while always promoting universal principles. It is certainly in this spirit that we have been cooperating within the Eastern Partnership since it was created in 2009.

My third point is about focus: I want to get away from the current model where we try to cover a very wide range of sectors with every partner. For those that want, and who are able, we should pursue the Association Agreements and DCFTAs. But, for those who can't, or do not currently want to engage so deeply, let's narrow the focus to where the real interests lie and build on more solid foundations. I'm thinking of essential areas such as:

These are areas where we can work together to make our partnerships more effective.

Lastly, we need to be more flexible: this means being able to react to changing circumstances and crises when they arise, including with our financial instruments. In the case of Ukraine, the EU has managed to quickly mobilize a broad range of instruments in response to the country`s needs. The EU is currently implementing a €355 million State Building Contract to support the Ukrainian government in preparing for in-depth reforms. It is providing €95m to support private sector development and economic recovery particularly in the east. Commission scaled up its assistance to meet the needs of the population of Ukraine regions suffering from the consequences of the conflict, totalling now €32.5 million from the EU general budget. The humanitarian part of the funding (€11 million) addresses the basic needs of the population in the areas directly affected by the conflict. It is also prepared to increase further its financial and technical support to political processes linked with Minsk implementation.

We're not giving up on our values

Some people ask me whether all this talk of pursuing interests means that we are giving up on our values. The answer is very clearly no. The promotion of democracy, human rights and rule of law is a defining characteristic of the EU. But let us ask ourselves, whether the ENP as currently constituted, has been the success we hoped, in transmitting these values.

It is my view that the values that are at the core of the EU are also in our partners' own interests. I will give you an example: rule of law is key to long-term political stability, but equally to attracting outside investment.   An independent judiciary and a system where justice is free from corruption is not only value in itself, but it is also indispensable to creating an environment for growth.

So, in the new ENP the messages should remain the same: but we should seek new ways to deliver our messages, and to be heard. I am looking for concrete ideas that will deliver results in the short to medium term, and ones the public can understand. And here I see a crucial role for you, as parliamentarians, in giving this review visibility on the ground in your countries and in ensuring that your constituents' views on the ENP are fed back to us.

Thank you for your attention"