First Vice-President of Iran: We are Ready to Develop Relations with Armenia Without Any Boundaries 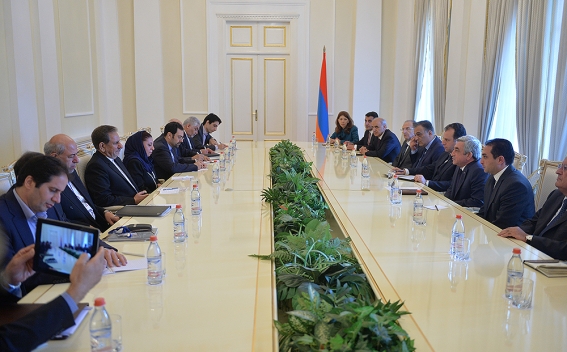 The RA President Serzh Sargsyan received today the delegation headed by Eshaq Jahangiri, first vice-president of the Islamic Republic of Iran (IRI), which has arrived in Armenia on an official visit. The president welcomed the guests and stressed that Armenia always uses every chance to talk about its warm ages-old relationship with friendly country of Iran which is of vital importance to Armenia and is conditioned by historical-cultural similarities, mutual economic interests, peculiarities of the geopolitical position, and by common approaches to a number of regional issues, the press service of the RA President informs.

Serzh Sargsyan noted that our country is keen on further promoting high-level political dialogue and cooperation with the IRI in all possible spheres. The president expressed confidence that the time has come to broaden the bilateral agenda and elevate the level of Armenian-Iranian relations by one more degree. In that context, Armenia’s president attached great importance to the discussions and agreements made during Mr. Jahangiri’s visit to Armenia which, according to the president, could start a new phase of bilateral relations.

IRI First Vice-President Eshaq Jahangiri thanked the president for the invitation to visit Armenia and for the warm welcome and at the outset, conveyed Iran’s President Hassan Rouhani’s sincere greetings to the RA president. Iran’s first vice-president expressed satisfaction with the results of negotiations with the RA government, noted that the agenda of his visit is quite busy: a number of other meetings are expected to take place in Yerevan which, according to him, will further strengthen ties between Iran and Armenia, countries with good-neighborly relations. Eshaq Jahangiri stressed that Armenia, as a friendly and neighboring country, occupies a distinct place in Iran’s foreign relations. "Armenia has been our friend in tough times and continues to be as a friend with which Iran is ready to develop relations without any boundaries," said the IRI first vice-president, placing importance especially on the intensification of trade and economic ties.

The RA president and Eshaq Jahangiri discussed the status of ongoing large energy and transport programs which are of crucial importance to the Armenian-Iranian collaboration, as well as the prospects for implementation of new initiatives in other mutually beneficial spheres, taking into account the broadening economic cooperation opportunities afforded by Armenia’s membership in the EAEU.

At the meeting, the parties also reflected upon regional issues and challenges and the Nagorno-Karabakh peace process, placing importance on the peaceful resolution of the conflict in accordance with the standards of international law.

The interlocutors exchanged views on the developments in the Middle East, including Syria. Both of them attached weight to the settlement of the Syrian crisis through peaceful negotiations.

President Serzh Sargsyan stressed the need to consolidate efforts in the fight against extremism, one of the most severe evils facing humanity, noting that Armenia is ready to make its modest contribution to that matter in an effort to promote regional stability and security.