Federica Mogherini: Establishment of Firmer Cooperation Between the EU and Armenia is Beneficial for the Whole Region 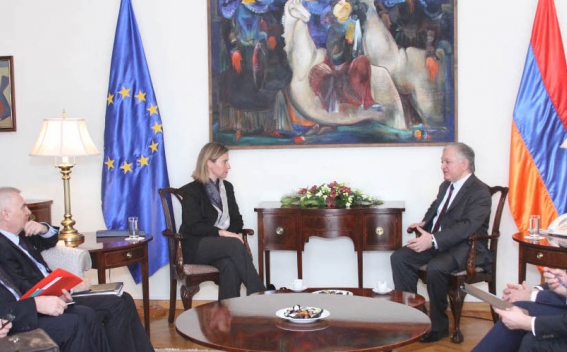 Welcoming the guest, Minister Nalbandian mentioned that this is her first visit to Armenia, which will undoubtedly have a positive impact on the development and deepening of Armenia-EU relations.

Expressing gratitude for the invitation to visit Armenia and the warm reception, Federica Mogherini stressed that establishment of firmer cooperation between the EU and Armenia is beneficial not only for bilateral relations, but for the whole region.

During the meeting, a wide range of issues of the development of Armenia-European Union cooperation, the process of negotiations on formation of new legal framework were thoroughly discussed.

The sides touched upon joint efforts to be exerted for the further development of cooperation, i.e. political dialogue, mobility, human rights, economic reforms, Armenia’s participation in different sectoral projects of the EU.

Edward Nalbandian mentioned that Armenia appreciates the EU’s continued support and assistance over the years, which has been instrumental for the implementation of the reform process and institutional capacity building in Armenia. Minister Nalbandian expressed gratitude to the European Union for the important support to the Diplomatic School since its establishment.

During the meeting, thoughts were exchanged over the situation in the Middle East, particularly in Syria, necessity of consolidation of efforts of the international community in the fight against terrorism. In this context, migration crisis and flow of refugee were touched upon. Edward Nalbandian stressed, that nearly 20 thousand refugees from Syria have been sheltered in Armenia, thus making our country the third largest recipient of Syrian refugees in Europe on per capita basis. The Foreign Minister of Armenia highlighted that the Armenian side highly values the possible assistance of the EU to Armenia on that matter.

Implementation of the agreement on Iran nuclear program was on the agenda of the negotiations.

Edward Nalbandian presented the latest developments in the negotiation process on the settlement of the Nagorno-Karabakh issue within the Co-Chairmanship of the OSCE Minsk Group. Federica Mogherini reaffirmed EU’s support to the efforts of the MG Co-Chairs in peaceful settlement of the issue. The sides shared the view that destructive steps leading to escalation of the situation, bellicose rhetoric are harmful and lead to the maintenance of the status quo.

Minister Nalbandian reaffirmed that Armenia would continue its consistent efforts for exclusively peaceful settlement of the Nagorno-Karabakh issue.