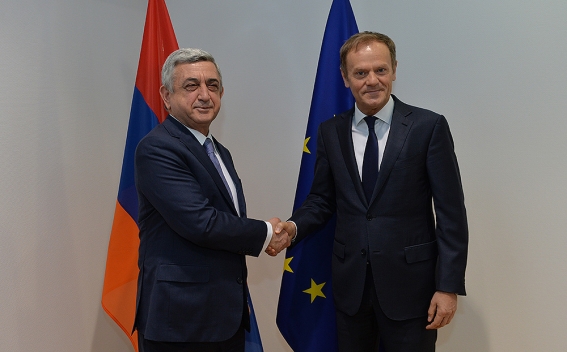 As "Armenpress"  was informed from the press service of the Armenian President's Office, President Serzh Sargsyan made remarks over the meeting with the European Council President Donald Tusk, saying:

"I wish to once again express gratitude to the President of the European Council, our good friend Donald Tusk for the invitation to visit the Brussels and our meaningful and sincere conversation. I have met with Mr Tusk numerous times both when he occupied other posts and during his current position and of course, I recall all our meetings with warmth. I appreciate sincerity and I am very thankful.

As Mr President noted, the key topic of today's meeting was the new framework agreement between Armenia and the EU. Today I can mention with satisfaction that the sides have finished the negotiations. The new legal document &ndash; the comprehensive and expanded partnership agreement reflects the real inclusiveness and deepness of Armenia-EU relations.

At the same time it should be mentioned that apart from the framework agreement we have recorded significant advance also in sectoral agreement by signing the "Horizon 2020" program on SMEs and innovations. In the near future we will also successfully finish the agreement on Common Aviation Area and the works to join Creative Europe initiative.

Speaking generally, the previous two years in Armenia-EU relations have been marked by vigorousness, political dialogue has significantly activated and cooperation in various spheres has expanded.

Of course, we also discussed other issues of Armenia-EU agenda with Mr Tusk, referred to regional and international developments. We expect the dialogue with Armenia on visa liberalization enshrined in the Joint Declaration of Eastern Partnership Riga Summit to kick off soon which will greatly contribute to the expansion and deepening of ties between our peoples.

As you may know the axis of our cooperation are the reforms being carried out in Armenia. The EU has always been with us during the 25 years of Armenia's independence, providing us with significant financial, technical and moral assistance the results of which are visible in various spheres; the spheres of public administration, justice, agriculture, statistics, government procurement have been reformed, vocational education has been improved to meet the requirements of the labor market, and the business and investment environment of Armenia has been improved as well. We are ready to propel this partnership in the mentioned spheres and other spheres of mutual interest for making new achievements. I am very thankful for the assistance.

Parliamentary elections will be held in Armenia a month later which are the first after the Constitutional reforms of 2015. We have one vision for changing the state governance system &ndash; to make a confident step forward towards the development and strengthening of democracy. To prepare to these elections the Electoral Code has undergone serious amendments and a new Electoral Code was adopted as a result of the consensus of all the political forces strengthening the guarantees for an open, transparent and fairer elections. Our goal is to hold elections in a way that public trust towards electoral procedures will be significantly raised. For that reason we have invited and solute the maximally large-scale participation of international observer missions in the upcoming elections, including from the European Parliament. At the same time we encourage local observers and civil society organizations to be active.

I thanked Mr Tusk for that the EU stands with us in this crucial period for Armenia and provides significant resources for the implementation of the provisions of the Electoral Code. I am convinced the results of this assistance and our cooperation will be visible for everyone.

Naturally, we touched upon Nagorno Karabakh issue during our conversation and reaffirmed that it has no military solution. The Armenian side is ready to reasonable mutual concessions, but anyway, the right of the people of Nagorno Karabakh to decide its fate through a free expression of will is the critical point of this issue. There cannot be any other position in this regard. The right of the people of Nagorno Karabakh to self-determination is enshrined not only in international fundamental documents, but is recognized and enshrined in various statements of the OSCE Minsk Group Co-chairs &ndash; the sole specialized establishment engaged in this conflict.

We can say that this is the position of not only Armenia on the given issue but also the unified position of the international community. We are thankful for the balanced stance of the EU on the peace process, and for trusting and supporting the OSCE Minsk group Co-chairs.

In the end, I want to note that the EU is an exemplary history of building civilized relations with its philosophy and ideology. The European Union is the history of overcoming problems between neighbors with consolidated efforts and building success based on, something we need so much today. We appreciate this achievement and are ready to preserve and cherish it together with you."