Mogherini: EU Is Willing to Expand and Deepen Cooperation with Armenia 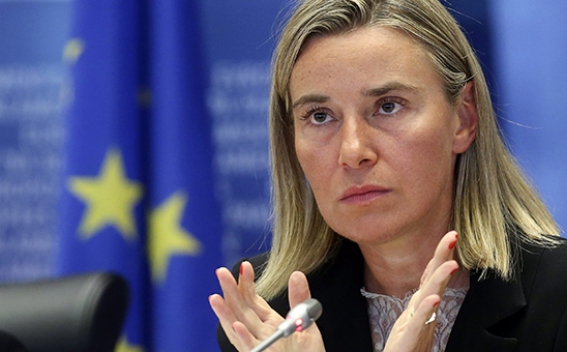 "First of all, let me say that it is a pleasure to welcome back Foreign Minister Nalbandian, my friend Edward. But this is a very sad day for Europe and I would like to start by expressing my personal condolences, and in the name of the European Union institutions, to all loved ones of the victims of the terrorist attack in Manchester and to extend our condolences also to all the citizens of the United Kingdom, the Prime Minister [Theresa May], and all authorities of the country.

The victims seem to be very young people. It is clearly an attack on the European youth and their love for live. I believe that young Europeans will continue to value their way of life, their freedom, their joy, their living together, their enjoying together. I believe fear will not prevail and the best response to terrorist attacks will continue to be our European youth continuing to live together, enjoying live together and to react in this way.

I would like to thank the Minister for having expressed his condolences at the beginning of our meeting. In these moments, we need friends and partners to be at our side. These are moments of mourning, but these are also moments of action. This is why I was just in contact with the UK Foreign Minister, Boris Johnson, offering all the European Union institutions' support that can be considered useful by the British authorities, in particular strengthening our exchange of information and cooperation on counter-terrorism. Obviously the entire network of the European Union's external work on counter-terrorism and prevention of attacks and radicalisation is at the disposal of the United Kingdom as it is clear these are challenges that need a common response and we are all united in solidarity in this moment.

So, Edward, thank you very much for a very fruitful and positive exchange we have had today. The EU-Armenia Cooperation Council was extremely positive. Armenia - whose independence, sovereignty and territorial integrity we support - is a very important partner for the European Union. We discussed together today the next steps in our relationship, as we work on the signature of the new EU-Armenia Comprehensive and Enhanced Partnership Agreement that was already initialled earlier this year, in March, in Yerevan.

The European Union is willing to expand and deepen cooperation with Armenia. We are already the first trading partner for the country, the first international donor and the strongest supporter of reforms. We are ready to continue supporting Armenia's reform process across a range of issues, including economic development, the business environment, the judiciary, human rights, the fight against corruption – issues that are very concrete and relevant for the citizens of Armenia.

We have discussed today our shared values, including our commitment to democracy, human rights, and the rule of law, which underpin the new agreement and our future cooperation. We were discussing how far we have come in the recent years and months. We launched negotiations in December 2015, the two of us here in Brussels, and we come now with good results that are the result of the hard, good work of our respective teams, who I would like also to thank for the good work we have managed to do.

We are also looking forward to Armenia's active and constructive stance in preparation of the upcoming Eastern Partnership Summit that we will hold here in Brussels, in November this year.

We also discussed the peaceful resolution of the Nagorno-Karabakh conflict. The European Union believes the status quo is unsustainable and that the conflict needs an early political settlement in accordance with international law. The European Union continues to fully support the mediation efforts and proposals of the OSCE [Organisation for Security and Co-operation in Europe] Minsk Group Co-Chairs.

We also exchanged on regional issues: we discussed the situation around the conflict in Syria; the broader regional issues. The EU has also reiterated its commitment to support the normalisation of relations between Armenia and Turkey and our encouragement to both sides to engage in this process without preconditions.

Edward, once again, I would like to thank you very much for the excellent work we have done in these couple of years and for your very constructive attitude, for coming to Brussels, for your visit, the last visit of your President [Serzh Sargsyan] just in February, and this continued political commitment that is bringing us - I believe - good results, looking forward to future developments that are as constructive and positive as the ones we registered today.

I would also like to thank you very much for having expressed your condolences for yesterday's attack in Manchester.