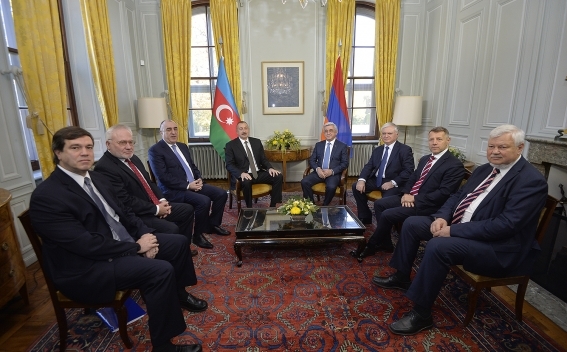 2017 was important in terms of the attempts by the mediators to restart the Karabakh conflict negotiation process after 2016 April War.

The year started in a quite tense situation taking into consideration the diversion attack by Azerbaijan on December 29 in Tavush region and the human casualties from both sides.

On the occasion, on January 9, the OSCE Minsk Group co-Chairs issued a statement urging the sides "to strictly observe the agreements reached during summits in Vienna and St. Petersburg in 2016, including obligations to finalize in the shortest possible time an OSCE investigative mechanism" as well as to return, without delay, human remains. After the return of the body of the Azeri saboteur, the Co-Chairs, in the statement issued after the meeting of foreign ministers of Armenia and Azerbaijan in February assessed it as a "useful humanitarian step" by the authorities of Armenia.

In the same statement there is another important part. In response to the stance and military rhetoric of Azerbaijan to escape from the arrangements made, to distract from the negotiation process, the Co-Chairs underlined the ceasefire agreement of 1994-1995 as a basis to stop violence, referring to the Deauville statement of the Co-Chairs emphasizing the unacceptability of the use of force, highlighting the importance to implement the agreements reached in Vienna and Saint Petersburg, urging to demonstrate restraint in public speeches.

Despite the statements, the escalations on the borders remained, and according to the RA MoD, on February 25, on Karabakh-Azerbaijan border simultaneously in both southeastern and eastern directions, using demining techniques and special means, the opponent launched an attack, which was successfully contained. Azerbaijan had human casualties and wounded soldiers, some bodies were left in the neutral zone.

The escalations continued also in May. According to the statement of the RA MoD, on May 15, in the eastern direction of Artsakh border, the opponent turned to another provocation firing from the controlled rocket at the object of the Defense Army, as a result of which military equipment was partially damaged. The Armenian side turned to the retaliatory actions firing from different caliber weapons. On the occasion the OSCE MG Co-Chairs issued a statement and importantly indicated in the statement that the initiator of the escalations was Azerbaijan.

Another escalation on the border took place on July 4 as a result of which Azerbaijan lost a child. Azerbaijani side tried to take an advantage of the situation by all means circulating the photos of the dead child in the Internet.

Via regional visits and statements, the mediators tried to ease the tension and in this context they especially underlined the agreements reached in Vienna and Saint Petersburg. Parallel to that, the OSCE MG co-chairs worked to restart the negotiations process and to organize the meeting of presidents of Armenia and Azerbaijan.

In this sense, the important achievement of the year can be considered the meeting of Azerbaijan’s and Armenia’s presidents in Geneva on October 16, as a result of which during the meeting with the representatives of the Armenian community in Switzerland, Serzh Sargsyan noted. "It can be stated that no specific arrangements have been made about the settlement options. But we have agreed to take measures to ease the tension so that we do not have losses in the front line." He also specified: "I wish to assure you that we do not see any such solution as may undermine Karabakh’s security in a way or another. The only solution acceptable for us is that Karabakh be outside Azerbaijan. Never can any Armenian leader accept and implement other solution whatsoever, and for that reason, we will do our utmost to develop Armenia by strengthening our country’s economy."

As a result of the meeting, the foreign ministers of Armenia and Azerbaijan, and the OSCE Minsk Group Co-Chairs issued a statement, in which "the Presidents agreed to take measures to intensify the negotiation process and to take additional steps to reduce tensions on the Line of Contact." The fact of the meeting was also positively assessed by the official Stepanakert, underlining the necessity to implement the agreements reached in Vienna and Saint Petersburg.

Azerbaijan tried to use the fact of Geneva negotiations to get rid of Vienna and Saint Petersburg commitments. However, the statement issued by the Co-Chairs afterwards clearly indicated that such attempts are neither productive, nor constructive. Particularly, in the statement of the foreign ministers of the OSCE MG Co-Chair states in the framework of the OSCE Vienna Ministerial Council, the necessity of implementing the agreements reached in Vienna and Saint Petersburg meeting was underlined. Special emphasis was on the importance of expanding the Office of the Personal Representative of the OSCE Chairman-in-Office.

At the end of the year, the talks on "Lavrov Plan" also became active, which was conditioned by the visit of Russia’s Foreign Minister, Sergey Lavrov, to the region, during which the Karabakh conflict was also discussed. However, during the press conference in Yerevan, Lavrov declared that the main components of the conflict settlement are reflected in 2007, 2009 and 2011 statements underling that they are package of suggestions and cannot be viewed separately. In addition, he stressed that Russia continues to work actively with its French and US colleagues on the issue. The talks on "Lavrov plan" were also rejected by President of Armenia, Serzh Sargsyan in his interview with "Armenia" TV on December 14. "During his visit to Yerevan, there was no conceptual suggestion by Lavrov, there was no new suggestion at all… Whatever there was on Karabakh was presented by Lavrov during the press conference," RA President noted.

Summing up, we can state that 2017, in general, passed in a rather tense atmosphere, which was on one hand conditioned by the Azerbaijani stance to violate the agreements aimed at strengthening the ceasefire regime, on the other hand by the regular increase of tension on the border at the beginning of the year.

The mediators, in their turn, made efforts throughout the year to realize the agreements reached in Vienna and Saint Petersburg emphasizing the steps to expand the Office of the Personal Representative of the OSCE Chairman-in-Office and increasing the observer mission. In parallel, especially in the second half of the year, work was done to restart the negotiation process, to organize the meeting of the presidents. The official Baku tried to use the agreement by Armenia to participate in Geneva meeting to annul the agreements reached in Vienna and Saint Petersburg. However, after the meeting, the mediators made it clear that the initiatives to strengthen the ceasefire, to build confidence and the start of negotiations are in parallel and neither of them excludes the other.

One can state, that 2017 was important in the sense of the negotiation revival, still the statements made after the meeting give no way to optimism.

In general, five meetings of foreign ministers of Armenia and Azerbaijan took place in 2017, and several Co-Chairs’ visits to the region.

The closing of the OSCE Yerevan office also had a negative impact on the general atmosphere, on the negotiation process. Besides, the noise around the position of the US Co-Chair, which was connected with the structural reforms of the US State Department, became an additional cause for discussions.