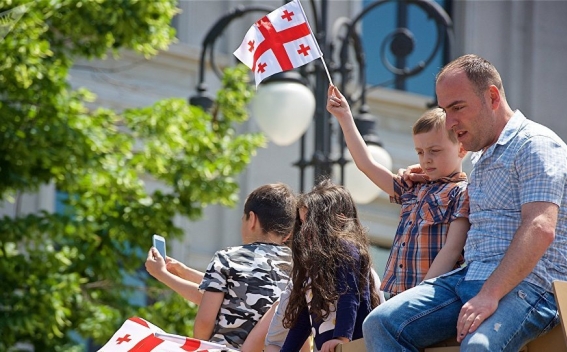 The internal political life of Georgia was quite full of both electoral processes and reforms.

Perhaps the key event in 2017 was the constitutional reform aimed at strengthening the parliamentary system of governance. Georgi Margvelashvili, the president of the country, and some opposition forces, spoke out strongly against the bill submitted to the Georgian Parliament in May, declaring their disagreement with separate provisions. The authorities tried to initiate dialogue, made some concessions, but it was not enough to ensure full consensus in the political field. The lack of consensus did not avoid from the attention of both the Venice Commission and the international partners of Georgia, who in their statements addressed those problems. Nevertheless, the Georgian Dream, which is a majority in the parliament, confirmed the reforms with three readings and overcame President Margvelashvili's veto.

According to the amendments, from 2024 the president of Georgia should be elected not by direct elections, but by the electoral college. From 2024 the majoritarian system will also be abolished and 150 MPs will be elected only by proportional electoral system. In addition, changes are made in the age requirements set for Presidential and MP candidates (40 and 25 respectively), the Parliament is moved from Kutaisi to Tbilisi and so on. The amendments also state that all the constitutional bodies should take all measures to integrate Georgia into the EU and NATO. Despite the adopted constitutional amendments, the Georgian authorities, taking into account the existing pressures, propose new amendments to separate provisions.

Another important event in Georgia in 2017 was the October local elections. As a result of not so competitive elections, the ruling “Georgian Dream” won in all 73 constituencies. The opposition “United National Movement” party ranks second in 51 constituencies, “The European Georgia” -  9, and the “Patriots' Alliance”  in 11 constituencies. In the elections to the local self-governing bodies, a great attention was paid to the capital Tbilisi. Tbilisi's local elections also won the “Georgian Dream” and Kakha Kaladze, the former Minister of Energy of Georgia, Deputy Prime Minister, became the new mayor of Tbilisi.

In 2017, the structural changes in the government were made for the management optimization and more efficient work. In November, according to Prime Minister Giorgi Kvirikashvili, the number of ministries decreased from 18 to 14 in Georgia - ministries of energy, agriculture, sports and youth, as well as the integration into European structures were dissolved. At the same time, as a result, six ministers left their cabinet.

The biggest public event in Georgia during the year, probably, was the abduction of Azerbaijani journalist Afghani Mukhtarli in Tbilisi and transfer to Azerbaijan, with the circulating news that the Georgian side also took part in this special operation. Both civil society and political forces gave quite negative assessment to this unprecedented incident by organizing different actions. In addition, Georgia's international partners also expressed their concern over the incident and, it can be said that this pressure made Georgian prosecutor's office to start an investigation.

It should be noted that during the year, public dissatisfaction was caused also by the closure of Gulen schools in Georgia under the pressure of the Turkish side. The arrest of Mustafa Emre Çabuk, the head of the Demireli College in Tbilisi, demanded by the Turkish side as he was accused of supporting the activities of the organization headed by Fethullah Gülen, was also widely discussed. Çabuk's requests for political asylum in Georgia were refused, and if the appeal is not satisfied, it will threaten him to be extradited to Turkey.

In addition to the above-mentioned events, in 2017, in Georgia's internal life there were also rearrangements in the opposition (in particular, the split of the main opposition MASH party), devaluation of lari, anti-terrorist operation in Tbilisi at the end of the year, etc.