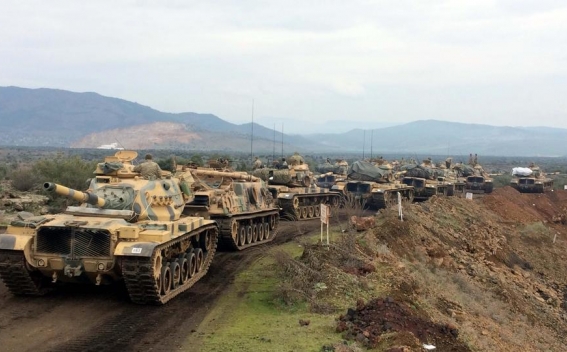 The column of the Syrian national forces safely reached Afrin. According to Ria.ru, this was stated by the representative of Kurdish self-defense forces Reyzan Hedu. He noted that their goal is to denounce the Turkish aggression directed against the Kurds.

"Today Erdogan turned out to be bad policeman, saying that he stopped the progress of Syrian forces heading to Afrin. These words are incorrect - the forces are already in Afrin," Hedu said. His words were related to the fact that earlier the president of Turkey announced that the militias retreated after they fell under the fire of Turkish artillery.

Hedu also said that dozens of journalists, who covered the progress of the Syrian national forces column, fell under artillery fire. He added that however the Kurds are in constant contact with the Syrian army, Damascus and the authorities in Afrin.

"We confront the Turkish aggression for 32 days. … They may have advanced to a number of positions, but on the whole the military campaign has been unsuccessful," Hedu added.

It should be noted that earlier some media reported, that the Kurds agreed with Damascus on the introduction of Syrian government troops in Afrin. Ankara refuted this, calling it misinformation. At the same time Erdogan said that Turkish troops will surround the city "in the coming days."

The Ambassador of Turkey to Uzbekistan Ahmet Bashar Shen said in his turn that Turkey's military operation "Olive branch" in Syria will continue until the country is completely cleared of terrorists.

Meanwhile, the official representative of the UN Secretary-General Stefan Dujarrik stated that the clashes in Syrian Afrin should be stopped so as not to put the local population at risk and not aggravate the situation in the region.

Earlier German Foreign Ministry also called to stop the fights in Afrin. They expressed concern that the actions of Turkey can aggravate the situation in Syria.

It should be reminded that on January 20 Turkey began "Olive Branch" operation in Afrin against Kurdish military groups, which Ankara considers terrorists.