Head of the Parliament:One of the Most Important Goals Is the Internationalization of Artsakh 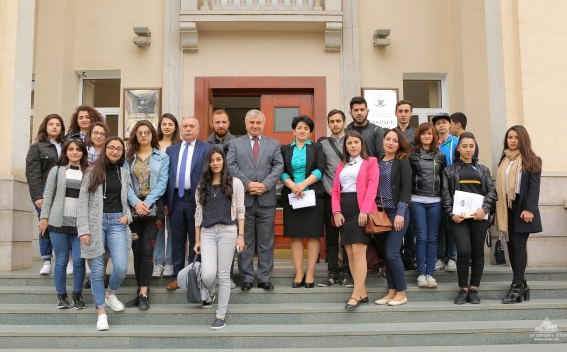 On April 13, the Head of the Artsakh Republic National Assembly met with the participants of the Students Forum dedicated to the 30th anniversary of the Artsakh Movement in the NA Big Hall, official page of Artsakh Parliament reports.

Welcoming the participants, Ashot Ghoulyan emphasized the importance of such events in the aspect of consolidating students around the same ideas, activating contacts, discussing issues of pan-Armenian importance and exchanging thoughts. Then the Head of the Parliament made a speech on "The Path Passed by the Republic of Artsakh: Achievements and Perspectives ".

"The 30 years path of the Karabakh Movement to regain identity for the Armenian people, years to clean the tinted image and to restore centuries-old traditions was a time for re-evaluating the values. No doubt, that we have succeeded in that, because today we have an independent Republic of Armenia, liberated and developing Artsakh and a Diaspora cherishing the pair of Armenian states," said Ashot Ghoulyan.

Referring to prospective programs and youth participation in them, the Head of the NA noted that one of the most important goals is the internationalization of Artsakh, especially in the outside world as a country of active, creative and thinking young people. In this area, consistent reforms in education, professionally correct orientation and the need for youth involvement has been highlighted.

At the end of the lecture the Head of the Parliament, turning to students of Armenian universities, advised while planning their future to think not only about working in Yerevan or other cities of Armenia, but consider as well Artsakh, being confident, that they are always needed in Artsakh.

Answering the questions of the forum participants, the negotiation process on the Azerbaijani-Karabakh conflict, the participation of Artsakh in it, the positions of the Armenian side and other topics have been touched upon.