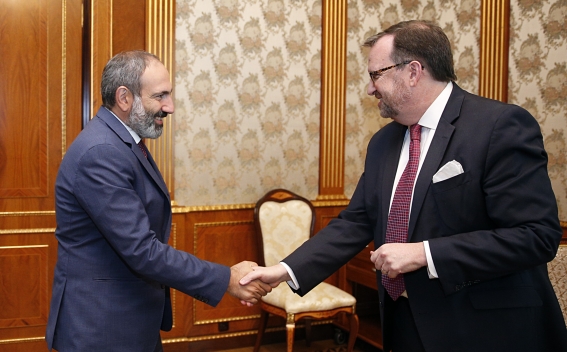 Prime Minister Nikol Pashinyan on May 18 received US Ambassador to Armenia Richard Mills, the official page of Prime Minister reports.

In his speech the PM of Armenia attached importance to the constant development of the Armenian-American ties and welcomed official Washington’s commitment and readiness to give new impetus to the bilateral cooperation in different sectors.

"The Armenian government is interested and attaches great importance to the mutual partnership with the American side in the process of reforms in democracy development, anti-corruption fight, human rights and other spheres. We are full of energy to reach our goals and concrete results also taking into account the positive atmosphere existing today in the country", PM Pashinyan said, stating that the government is committed to moving forward the activities at these directions.

In his turn US Ambassador Richard Mills congratulated PM Pashinyan on assuming office and conveyed the readiness of the US government to assist Armenia in implementation of the aforementioned goals.

"The US government is committed to assisting the goals on democracy, human rights, transparency and accountability that will improve Armenia’s business environment and will make the country more attractive for American investors. We see a number of opportunities for dialogue and cooperation, including within the format of the Armenian-American inter-governmental works”, the Ambassador said.

During the meeting a number of other issues relating to the increase of trade turnover volumes between the two countries, the ongoing regional affairs, holding parliamentary elections in Armenia, the reforms of the Electoral Code and issues of bilateral interest were discussed.