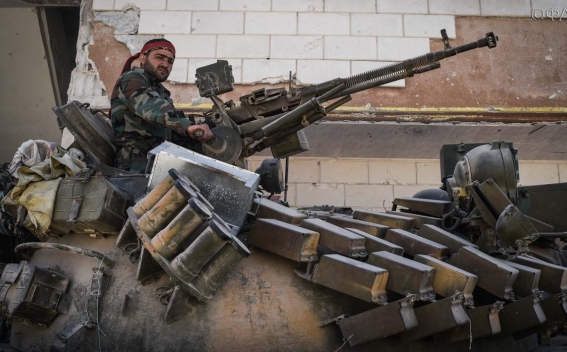 The army soldiers battled against ISIL East of the village of al-Saqiyeh in Northeastern Sweida and captured several key areas near Taloul al-Safa region.

Other units of the army fought against ISIL East of the village of al-Sabaki and freed more areas.

In the meantime, the army's artillery and missile units and aircraft pounded ISIL's positions and movements in Araz al-Kara'a, al-Khatib Farms, Sanim al-Qaraz, East of al-Dayatha, Rabat al-Hossan and Tal Razin that is located 15 to 30 km away from villages in Eastern and Northeastern Sweida, destroying several vehicles, military hardware and killing a number of terrorists.

On Monday, the army soldiers, backed up by the artillery and missile units and Air Force, engaged in tough battle with the ISIL and advanced towards al-Dayathah region 3km in the depth of Badiyeh.

Other units of the army advanced against ISIL in al-Kara'a and Deko hills and captured several areas.

In the meantime, the artillery and missile units pounded ISIL's strongholds in Tal Sanim, Barak al-Tamthounah and Satah Namlah region in Eastern Badiyeh, inflicting major casualties on the terrorists.

The ISIL terrorists further retreated towards unleveled areas in Badiyeh of Sweida after the army's rapid advances toward Taloul al-Safa.

Other units of the army managed to capture several hills and residential areas, including Tal Basir near the small towns of al-Kasib and Tarba in Eastern Sweida and Tal al-Razin, Qabasha region, South of the town of al-Malah and outskirts of the town of Sha'af.