US-Russian Competition in South Caucasus is Getting Much Stronger 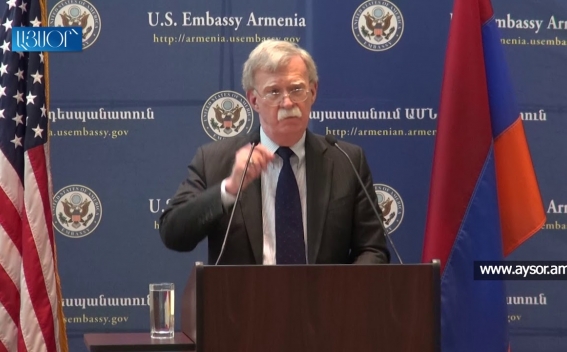 One of the most discussed topics in the region since last week has been the visit of the US President's Security Advisor John Bolton to Russian and South Caucasian three capitals. Everyone was trying to figure out what the White House's representative had come for and what signals thus were sent to the leaders of these several countries.

Let's note that this was quite a unique visit. The last time the US President's Security Advisor visited Armenia in 1997 and was the first time in Azerbaijan.

If we try to define the purpose of the visit in one paragraph, it was a test of the strength of the US position in the region and the desire to increase the US influence in order not to allow Russia's "monopoly" in South Caucasus. It can be said that the Trump administration has paid little attention to the South Caucasus in its foreign policy, even though the former US Co-Chair of the OSCE Minsk Group James Warlick recently stated that he does not see the interest of the White House on the Artsakh issue and would like to see Washington become more active.

Now Bolton's visit and interest in the region is conditioned by the growing importance of Yerevan, Baku and Tbilisi for the United States as "strategic importance of the region," as US Presidential Advisor said during his press conference. And that, in turn, is explained by US interest to provide Iran's neighboring countries engagement in US sanctions against Iran, as well as with desire to prevent the absolute influence of Russia in this region.

Strangely enough, however, Bolton's announcement stems from the fact that the US is ready to compete with Russia even in the issue of arms sales to the Karabakh conflict parties. Trump's advisor announced in Yerevan that arms sales by the Russian Federation do not promote peace in the region, but at the same time keep control over the parties, so Washington is ready to compete with Russia in this regard, especially given the fact that "American weapons are more qualified than Russian ones". It turns out that Washington, as a mediator in the settlement of the Artsakh conflict, a co-chair of the OSCE Minsk Group, is not trying to put pressure on Moscow, preventing arms sales to conflict parties, but instead is ready to compete with the latter to increase the leverage on Armenia and Azerbaijan and to supply more powerful weapons to destroy the people of the region.

John Bolton has made some remarkable statements about the Artsakh conflict. In particular, he noted that the settlement of the conflict is the best way for Armenia to get rid of external influences, meaning Russia, naturally. Moreover, he tried to show the Armenian Prime Minister the "right way", noting that by getting the mandate of the overwhelming majority of people in the upcoming elections, Nikol Pashinyan will be able to take decisive steps in the Artsakh issue. Under such steps, Bolton meant rather unpopular solutions, in the face of concessions, about which US Ambassador to Armenia Richard Mills spoke a few days ago. If we take into account Bolton's observation that he did not come to change the US policy or to make new proposals, we can assume that the issue will become relevant after the December elections and then the US can put pressure on Armenia to make concessions…

At the same time, Bolton did not talk about any concessions or decisive steps when speaking in Baku. He only thanked Aliyev for presenting his approaches and stated that the settlement of the conflict is important for the United States.

Summing up the results of James Bolton's visit we can state that it raised many issues in the region, at the same time giving a certain degree of activation of the US-Russian competition in the South Caucasus. And this is not happy news from the perspective of regional stability. At the same time, given the current US-Russian dialogue, it is logical that the US President's Adviser was trying to measure the US presence in the region and its potential in the future dialogues with Moscow.