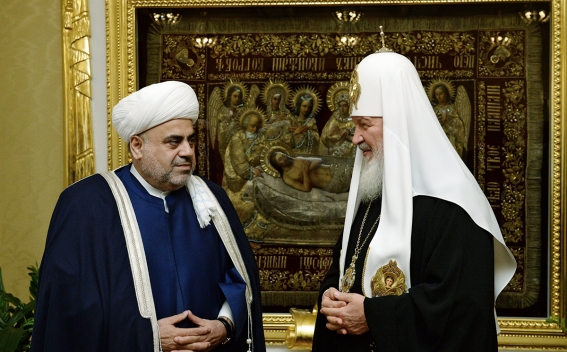 At his meeting with Allahshukur Pashazadeh, the spiritual leader of Azerbaijanis and chairman of the Caucasian Muslim Board, Patriarch Kirill of Moscow and All Russia expressed a view on the resolution of the Nagorno-Karabakh conflict, News.am reports citing the official website of the Russian Orthodox Church.

Also, the Patriarch recalled the trilateral discourse between himself, his interlocutor and the Catholicos of All Armenians, and which continues for 30 years and aims to contribute to the settlement of this conflict.

“Even though there is no major [respective] change today, it’s important that there is no war,” Patriarch Kirill said. “We have reached an agreement on the return of captives, as well as an agreement has been signed that no action to destroy religious monuments and structures (…) will be taken. All this will have a positive impact on the discussion of the topic in connection with the Karabakh issue.

“If everything were dependent on religious figures, we would have long resolved that matter. So, we consider it our duty to beneficially influence, including politicians, by encouraging them to a pacific settlement of the issue. We have great hope that the day will come when this issue will be resolved.”