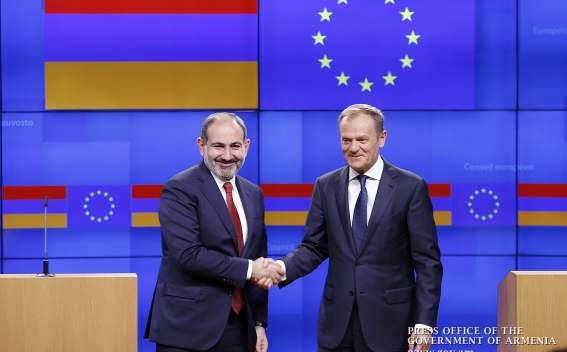 To sum up prime minister Pashinyan’s visit to Brussels we can note the positive tendencies, however, no tangible results. Hereinafter a few key issues on the RA-EU agenda.

RA-EU agreement still on the agenda

Restoration of the rationale behind RA-EU relationships was crucial. Namely the Armenian authorities stressed that further relationships will be grounded on the CEPA agreement signed in November 2017. Rapid ratification of the agreement on behalf of EU member countries was emphasized in the light of bringing it to life as soon as possible.

The point is that the issue almost skipped the RA prime minister’s agenda during his previous Brussels visit. The resulting impression was as if official Yerevan shifts the rationale behind its cooperation with the EU by emphasizing increased assistance issue against the Armenian revolution and democratization processes. In its turn the EU did not support that approach by expecting tangible results and pointing out the necessity of preserving the pattern of the relationships.

At present the process and the relationships sound to be on course that gives way to hope for their stable development.

The road map of the agreement is currently being agreed upon. Piotr Świtalski, the EU Ambassador to Armenia had stated earlier that by end January the EU will issue its observations concerning the document drawn by the Armenian side. On the eve of the visit the Armenian foreign minister had announced that steps regarding the implementation of the agreement must have been clarified before the visit. However the interdepartmental committee is as of now processing the changes based on the EU observations. This process requires institutionally tight and effective RA-EU cooperation. The document will also showcase how ambitious the government’s vision is.

The EU is willing to assist Armenia against explicit results

The European Union noted that they are ready to continue the financial assistance and consultation to Armenia to foster the improvements in the country. The EU has envisaged $176mln assistance for the years 2017-2020 for human rights and fundamental improvements.

Aside from this, European Neighbourhood Policy And Enlargement Negotiations Commissioner Hahn who visited Armenia late January, had noted that Armenia should propose competitive projects for financial assistane increase.

The Brussels statements on the whole showcase the EU willingness for closely cooperating with Armenia and assisting the improvements as well financially. However it is not going to reflect the picture the Armenian authorities has following the revolution. Financial aid will be allocated for explicit programs and explicit results. Hahn noted that the EU is ready to assist Armenia in all its endeavors.

The issue that Armenia currently faces is implementing improvements and achieving tangible results as well as proposing elaborate, competitive and ambitious programs.

Naturally this issue was also on the agenda of the meetings with the EU heads. It was noted that Armenia carried out all its obligations and emphasizes the importance of prompt dialogue over the issue.

European Commission President Jean-Claude Juncker said that the European Commission supports launch of Armenia-EU visa liberalization talks and he and Commissioner Hahn are going to launch a heated dialogue with those member states that are consistent on this issue.

This is an important signal on behalf of the EU. This upbeat statement showcases that the EU does not see institutional obstacles for the launch of the talks. Further developments are due to the political will of EU member states.

Given the sensitivity of the issue for some EU states as well as European Council elections to be held in May with a possible change of members (consequently it is not reasonable to link results with actors’ will) targeted and substantial efforts should be invested in work with each EU state member to have results in the visa liberalization issue. Among other things Armenia should be able to get the support  of its traditional friends and impact other EU states through them.

This issue may reflect how Armenia’s new authorities orientate in the EU’s intricate mosaic and how effectively they can build cooperation with other EU states. It will lay the ground to promote other issues in the future.

As for now there are no tangible results and consistent work in this direction.

At present it is to be noted that at least statement wise they have managed to ease the tensions and set the relationships to a more or less positive course. However there is substantial lack of tangible results. Those will require consistency and initiative as well as improvement of institutional cooperation with the EU.

It is also important to be consistent in significant for Armenia issues such as holding the donors’ conference. Hahn touched upon this in Yerevan, however, neither the Armenian nor the European sides mentioned this in Brussels.