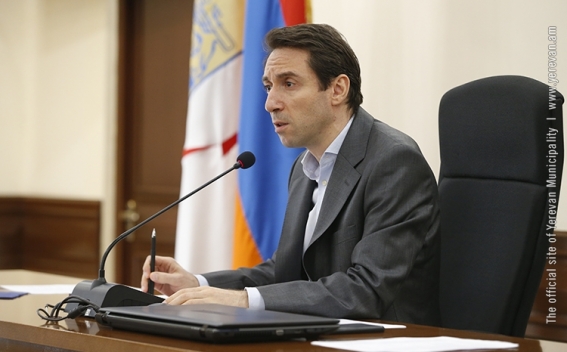 The replenishment of the facilities of the municipal company “Waste removal and sanitary cleaning of Yerevan” is going on.

Two new trash removing trucks and the first consignment of trash containers purchased by the Municipality (400 ones) were delivered last week. During the weekly working meeting the Mayor was reported that the process of replacement of trash containers is going to be started from Davtashen administrative district. The representatives of “Sanitek” company once again claimed that the company is not going to purchase new trash removing trucks and containers.

“Yerevan can’t wait for you for ages, and the city authorities took measures. According to the contract with “Sanitek” there are to be 16000 trash containers in the city, but currently the number of containers is 4000 and they are mostly unsuitable for use. We are starting the process of replacement of trash containers and we won’t let the process of waste removal in the capital to remain as improper as it is now. During my election campaign I said that we are going to clean up the city from piles of garbage and I restate my words. Whether it will be accomplished with you or without you depends only on your company. You must understand that in case of failing the activities the company will get a corresponding assessment. The city authorities showed great support to your company, we did our best to let it overcome the difficulties, but if you don’t want it we won’t be able to help you”, stressed the Mayor.
The director of the municipal non-commercial organization “The centre for neutralization of stray animals” reported that 98 dogs had been sterilized the previous week. The Mayor was reported that on August 8 the tender for the construction of the new building of the organization will be announced. The centre will have its own vet clinic which will be provided with all necessary facilities and equipment.