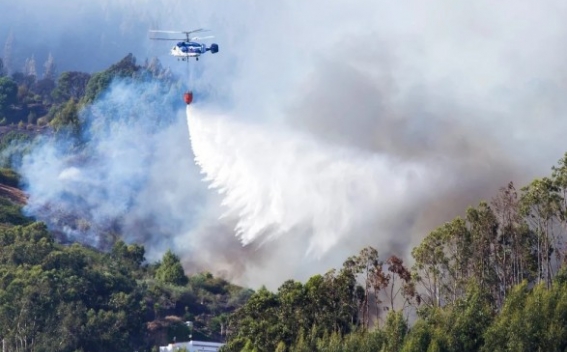 About 9,000 people have been evacuated from their homes on Gran Canaria in Spain’s Canary Islands, where firefighters are battling a wildfire that has burned more than 23 square miles of land, The Guardian reports.

More than 700 firefighters supported by 11 helicopters and five aeroplanes are struggling to contain the fire, which began on Saturday near the town of Tejeda and is advancing on several fronts, propelled by a combination of high temperatures, strong winds and low humidity.

The head of the Canary Islands government, Ángel Víctor Torres, described the blaze as voracious and an environmental disaster, and said it had been “neither contained nor controlled”.

The head of the local emergency services, Federico Grillo, said the fire’s main front was “impossible to extinguish” and that firefighting efforts were concentrated on containing the right-hand flank, where there are a large number of homes. The left-hand side had been stabilised, he said.

He said the front was vast and that “whatever we do in the west, depends on the east, which could send the flames back and reignite what we have extinguished”.

The fire has so far affected the central part of the island rather than coastal areas busy with tourists in the summer months. The area is mainly mountainous and criss-crossed by ravines, making much of it inaccessible.

Grillo said the flames had reached heights of 50 metres (164ft) as the fire devoured swaths of Tamadaba natural park, where he said it had “an open road”. He said the fire had made the only land access to the park impassable and that trying to fight it on the ground would be suicide.

“We’re not going to be able to do anything in that area, where the situation is really bad,” Grillo said. High temperatures, strong winds and low humidity were forecast for the rest of the day.

About 40 people are trapped in a cultural centre in Artenara, which has been cut off by the fire, authorities said. Nine municipalities were evacuated on Sunday night.

Local officials have asked central government and the Red Cross for as many as 600 beds to accommodate people displaced from their homes. Those remaining at home have been told to stay away from their windows as the heat may cause the glass to explode.