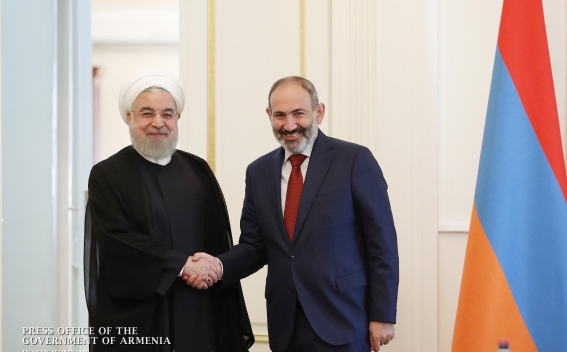 I am happy to welcome you to Yerevan, the capital of Armenia, in the wake of our very impressive visit to Iran this February. Our two countries used to have good relations, and we boast very good relations today as well. Our position is that the relations with Iran should be free of geopolitical influences as much as possible because we are next-door neighbors and we have many common interests. Therefore, we should cooperate for centuries and millennia,” Prime Minister Pashinyan said.

The Premier noted that this is the Iranian President’s first visit to Armenia after the recent political changes in the country, noting that Armenia prioritizes the relations with its neighbors and friendly countries.

Both sides highlighted the regularly held joint sessions of the Armenian-Iranian Intergovernmental Commission, which have resulted in several agreements aimed at developing economic ties between the two countries.

In turn, the Iranian President thanked the Armenian Prime Minister for the warm welcome. “We attach great importance to the development and expansion of multifaceted relations with Armenia as a friend and a neighbor. We are ready to continue working with your government to develop and implement new programs, expand the scope of the Gas for Electricity project. At the same time, we are prepared to implement gas, wind and sun energy-operated power engineering projects in Armenia. We are keen to initiate regional projects and develop infrastructure in the energy sector,” the Iranian President said, adding that the Iranian side is interested in the cooperation with Armenia in the field of transport infrastructures.

Prime Minister Pashinyan welcomed the Iranian side’s readiness to expand the Gas for Electricity project. The Premier and the Iranian President tasked the respective government officials to develop and submit proposals within the shortest possible deadlines on expanded cooperation in the aforementioned field.

Reference was also made to the prospects of joint efforts in railway communications, high technologies, customs, science and tourism.

Hassan Rouhani stressed that the bilateral trade turnover has considerably increased ever since Nikol Pashinyan’s government assumed office in Armenia, noting that the joint projects continue to be successfully implemented. Rouhani said they are ready to discuss the implementation of the Meghri HPP project, boost capital investments and trade turnover via the free trade zones.

The interlocutors exchanged views on the transit routes to connect the Persian Gulf to the Black Sea. Prime Minister Pashinyan emphasized that the realization of this program is in the strategic interest of our country, and Armenia stands ready to take practical steps to that end.

The parties took the opportunity to discuss regional issues, including the NK conflict settlement process. Prime Minister Pashinyan thanked the Iranian President for abiding by a balanced stance on the Nagorno-Karabakh conflict. For his part, Hassan Rouhani highlighted the need for reaching a peaceful settlement based on the positions and views of all parties to the conflict.