MYSQL ERROR: [1064]You have an error in your SQL syntax; check the manual that corresponds to your MariaDB server version for the right syntax to use near '' at line 1 State Department Opposes Turkey Sanctions, Genocide Resolution
YEREVAN C°
RA CB: 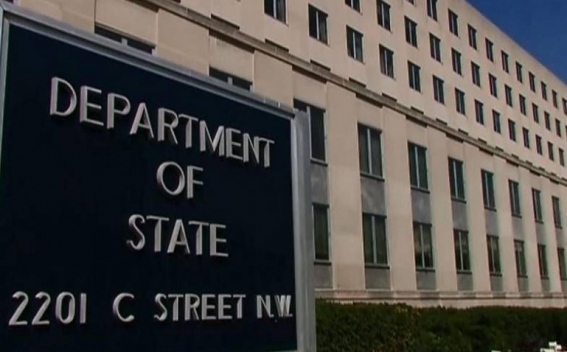 The administration is concerned that the sanctions - passed 403-16 in the House last week in response to the Turkey’s military offensive in northern Syria - will tie its hands and cut off options to resolve U.S. concerns about Turkey’s actions, said the official, who asked not to be identified discussing internal deliberations. The official wouldn’t say whether President Donald Trump intends to veto the bill.

The measure, H.R. 4695, would sanction senior Turkish officials and prohibit them from entering the U.S. It would also bar the transfer of US defense materiel to Turkey for use in Syria, and it would require the Pentagon and State Department to submit plans to prevent the resurgence of Islamic State.

House Foreign Affairs Chairman Eliot Engel, a New York Democrat, said during debate on the measure that Trump gave Erdogan "the green light to launch a military invasion of northern Syria" that resulted in "slaughtering our Syrian Kurdish partners who fought alongside the United States" against Islamic State. The administration has denied that Trump’s withdrawal of US forces gave a go-ahead signal to Ankara.

The same day the House passed the sanctions bill, it also approved a resolution condemning the massacre of 1.5 million Armenians early in the last century by the Ottoman Empire, the predecessor of the Republic of Turkey. President Recep Tayyip Erdogan’s government vehemently opposed the resolution and summoned US Ambassador David Satterfield to express its disapproval.

According to the administration official, the decision to pass the genocide resolution just as the House was condemning Turkey over the Syria incursion is unfortunate timing and may result in legislation that’s seen as punitive rather than principled.

The Trump White House had previously held off making statements about the initiatives, but past administrations had been similarly wary of genocide resolutions, arguing it would only impede reconciliation. Turkey has warned for years that such resolutions could lead to a breakdown in relations.

The official said the US position hadn’t changed, and it mourns the 1.5 million Armenians deported and massacred at the end of the Ottoman Empire. The US already commemorates Meds Yeghern, what it calls one of the worst mass atrocities of the 20th century, and welcomes efforts by Armenia and Turkey to reckon with their history, the official said.