Erdogan Plans to Discuss Situation in Syria with Putin 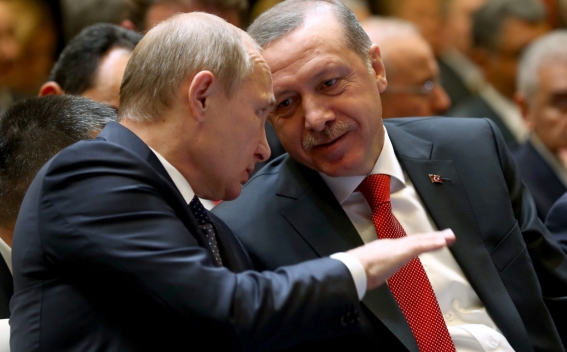 Turkish President Recep Tayyip Erdogan has said he plans to discuss the situation in Syria with Russian leader Vladimir Putin.

"Last evening, I held talks with [US President Donald] Trump. After that, I will also have talks with Putin to evaluate the situation [in Syria]," he told reporters at a news conference in Ankara on Thursday, TASS reports.

According to the Turkish president, Ankara "will honor its part of the commitments under the agreements that had been reached to the very end." "We do not back away from the memorandum," he added.

On October 9, Turkey launched a military incursion into northern Syria, codenaming it Operation Peace Spring. The Erdogan government claimed that its goal is to clear the border area of what it calls ‘terrorists’ (Turkey’s broad label of the Kurdish forces) and establish a 30 km-long buffer zone in Syria’s north, where over 3 million Syrian refugees in Turkey would resettle. Damascus branded the operation as an act of aggression, while the international community condemned Ankara’s military operation.

On October 22, Russian President Vladimir Putin and his Turkish counterpart Recep Tayyip Erdogan signed a memorandum on joint actions aimed at resolving the crisis in northeastern Syria at a meeting in Sochi. In accordance with the document, on October 23, Russian military police and Syrian border guards were deployed to the areas bordering the 30-kilometer safe zone, which Turkey is trying to set up.

On October 29, Russian Defense Minister Sergei Shoigu said that the Kurds had completed the withdrawal of their armed units from that safe zone. On November 1, Russian and Turkish military servicemen carried out the first joint patrol of the area east of the Euphrates River.