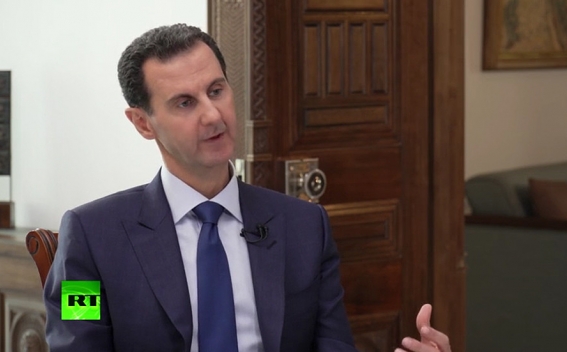 The sanctions the US and Europe placed on Damascus serve a single goal: to pit people against the government and make them uphold the West’s agenda, Syrian President Bashar Assad told RT in an exclusive interview.

The restrictions the EU and the US imposed against Syria initially targeted ordinary Syrians so that they would blame the government for their woes and eventually rebel, President Assad told RT’s Afshin Rattansi. Now, as the West has kept renewing the sanctions year by year for almost a decade, they serve another goal: to punish Syrians for refusing to bow to the pressure, the president said.

Those people were expected to rise against their government during the different stages of the war but they did not. They were supposed to support the terrorists – the ‘moderate rebels’ and ‘angels’ of White Helmets – but the people did not and stood with their government. So, they have to suffer. They have to pay the price and learn their lesson that they should stand with the agenda [of the West].

He also sees the sanctions push as a desperate attempt to topple the government in Damascus, which has so far survived a bitter civil war and large-scale terrorist presence. These plans are destined to fail, according to Assad, because public opinion will not be swayed so easily now after what Syrians saw during the years of war.

“This might also be a last-ditch attempt to push them to be against the government. They tried it last winter, they tried it before but it did not work because people knew the whole story and knew where their interests lie.”

Syria has been hit with multiple rounds of crippling sanctions since 2011. The US sanctions include the freezing of Syrian state assets and an embargo on oil sales. A US ban on the export, sale, and supply of services and any investments in Syria has also been in effect. The EU sanctions are not as severe, but have dealt a heavy blow to the economy as well, and include trade restrictions, asset freezes, travel bans, and an arms embargo.

Rattansi also asked Assad what he thought when the British government sent the Royal Navy to intercept an Iranian vessel claiming it was heading to Syria.

WATCH the full interview with Bashar Assad on RT this Monday.