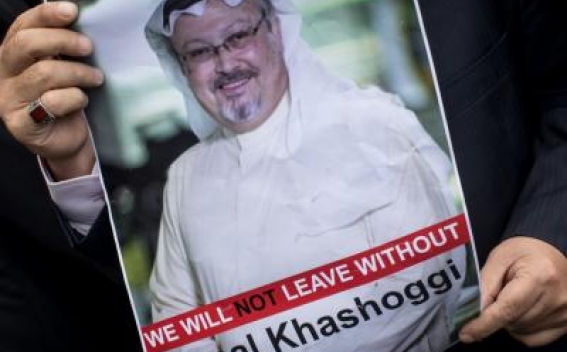 Five men have been sentenced to death and another three face a total of 24 years in prison for their roles in the gruesome murder of the dissident journalist Jamal Khashoggi at the Saudi consulate in Istanbul last year, the Saudi public prosecutor’s office has said, The Guardian reports.

Eight of the 11 people on trial were found guilty of the killing, which triggered the kingdom’s biggest diplomatic crisis since the 9/11 attacks as world leaders and business executives sought to distance themselves from Riyadh.

However, the investigation concluded “the killing was not premeditated …. The decision was taken at the spur of the moment,” deputy public prosecutor and spokesperson Shalaan bin Rajih Shalaan said, reading the verdict in the Saudi capital on Monday.

The verdict contradicts the conclusion of the CIA and other western intelligence agencies that crown prince Mohammed bin Salman directly ordered Khashoggi’s assassination, an allegation the kingdom has strenuously denied.

The interrogation team had orders to repatriate Khashoggi from Turkey, Shalaan said, but decided it would be impossible to transfer the journalist from the consulate to continue negotiating elsewhere.

“It was agreed, in consultation between the head of the negotiating team and the culprits, to kill Jamal Khashoggi inside the consulate,” Shalaan said in response to questions from journalists.

The probe found Qahtani had no proven involvement in the killing, after being investigated and released without charge. He has, however, been sanctioned by the US for his alleged role in the operation.

The court also ruled that the Saudi consul-general in Istanbul at the time, Mohammed al-Otaibi, was not guilty. He was released from prison after the verdicts were announced. Otaibi has also been sanctioned by the US due to his “involvement in gross violations of human rights” and his family is under a travel ban.

The former deputy intelligence chief Ahmed al-Asiri, who Shalaan said had ordered Khashoggi’s repatriation from Turkey, was tried released due to insufficient evidence.

The murder of Khashoggi sullied the reputation of the newly appointed crown prince, who

has attempted to portray himself as a liberal reformer of the conservative country and is popular at home.

The Saudi government denies the prince had knowledge of what it says was a rogue operation. The prince himself told US television in September that he took “full responsibility as a leader in Saudi Arabia”.

Khashoggi, a US-based columnist for the Washington Post critical of the Saudi government, was killed after entering the Saudi consulate in Istanbul on 2 October last year on a visit to pick up paperwork for his forthcoming marriage.

The 59-year-old’s body has still not been found and is thought by Turkish investigators to have been dissolved in acid.
In the investigation into the murder, 21 people were arrested and 10 called in for questioning without arrest, according to Shalaan.

All the defendants may appeal against the preliminary verdicts, he added.

No other details were immediately given about the rulings in the highly secretive trial conducted over nine sessions which began in January. The identities of the men are unknown and UN investigators have been repeatedly barred from hearings, although a handful of diplomats, including from Turkey, as well as members of Khashoggi’s family, were allowed to attend the sessions.

Ankara has repeatedly sought the extradition for trial in Turkey of 18 Saudi suspects, including a 15 man hit team it says flew into Istanbul hours before the killing to dispatch the journalist.

Agnès Callamard, a UN special rapporteur who authored an inquiry into Khashoggi’s death, said in a tweet on Monday that the trial’s conclusion was a “mockery” and the “antithesis” of justice. She has previously said the search for justice must not be left to the Saudi judicial system, which is “so vulnerable to political interference”.

Dozens of high-profile critics of Prince Mohammed, including women’s rights campaigners, are in prison facing trial for treason.

The verdict was also met with criticism in Turkey. Yasin Aktay, a member of Turkey’s ruling party and a friend of Khashoggi, said the Saudi court had failed to bring the real perpetrators to justice.

“The prosecutor sentenced five hitmen to death but did not touch those who were behind the five,” Aktay told the Associated Press. “These are people who cannot even use the bathroom without the permission of their superiors.”

“The verdict neither meets the expectations of the public conscience nor the feeling of justice,” he said.

Saudi Arabia initially denied its officials were responsible for Khashoggi’s disappearance, but as Turkish authorities continued to leak evidence of high-level involvement, the kingdom eventually admitted its agents carried out the killing, offering a series of contradictory explanations.

Donald Trump, who has made Saudi Arabia the keystone of his Middle East policy, condemned the killing but has staunchly defended his ally, Prince Mohammed. His administration has sanctioned 17 Saudis suspected of being involved in Khashoggi’s death, though not the crown prince.

Trump has steadfastly resisted calls by congress and members of his own party for a tougher response, defending maintaining good relations with the kingdom because of its importance as a major trade and diplomatic ally.