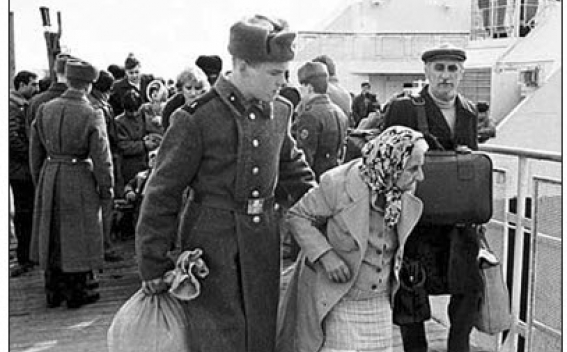 "The anxiety was growing over and over, and what yesterday seemed stable, today collapsed before our eyes. The neighbors, who were almost family members for you, suddenly showed the other side of their face. The teacher of the University of Nargiza, with whose kids we were playing in the yard and made friends, suddenly declared that if the group of people massacring Armenians come to their yard, they would point to all the Armenian apartments. A neighbor Elkhan, who moved to Baku from some Azerbaijani region several years ago and from whom we were always afraid, suddenly offered his help. It was him who was not afraid to rush for help to the frightened Armenian aunt Anya, when he heard the signal of danger that we used -  knock on the ceiling: he ran, but risked his life. After all the murderers were really all around. Fortunately, it turned out that Yusuf, another neighbor of ours, who later was also hiding Armenians at his place, decided to make a joke knocking on the door of Aunt Anya shouting "Armenians, open up!". Elkhan rushed with all his might never forgetting that his son was saved by an Armenian doctor. He did not forget ... while hundreds of thousands forgot... Forgot that Armenians built Baku, treated and taught. But in Baku there were Azerbaijanis, who did not kill, nor did they forgot, maybe... They just stepped aside and watched in silence. They handed over their city to the cruel crowd. They betrayed not only their Armenian friends and neighbors, they also betrayed themselves,"- the former resident of Lenin Avenue in Baku City, Anna Petrosyan told "Armedia" IAA.

In January 1990, Baku was painted in bloody color. Color of Armenian blood. Once a warm, friendly city with a special aura, which was created by mixing different cultures and traditions, turned to evil. Not once, not overnight. Within two years, against the backdrop of the national liberation struggle going on in Karabakh, rallies were held in Baku. The main slogan of the crowd was "Death to Armenians". And although the city had already seen acts of violence against the Armenians, they did not take a mass character, as the crowd was afraid to go against the thousands of Armenians living in Baku. But the city was gradually emptied. Armenians left the city, which was once considered their homeland. And when mostly the elderly people were left in the city, waiting for the young to seek new shelter abroad and come back to take them away, the disaster struck. Nothing already could stop the angry, bloodthirsty villains. They beat, raped, burned, abused, robbed. They killed ... killed Armenians. Killed with the connivance of the authorities - both local and central. The sneaky policy of Gorbachev, who gave the order to send Soviet troops to Baku too late, led to the tragedy. The tragedy that divided the lives of Armenians in Baku into before and after. Hundreds of thousands of Armenians, who thought that they would soon be able to return to their homes, suddenly realized that there is no return, and will not be any.

Today, the Azerbaijani propaganda machine is trying to politicize the events of those days, trying to represent a crowd of murderers as innocent victims, who rebelled against the Soviet regime and were murdered in result - declaring them the martyrs ...