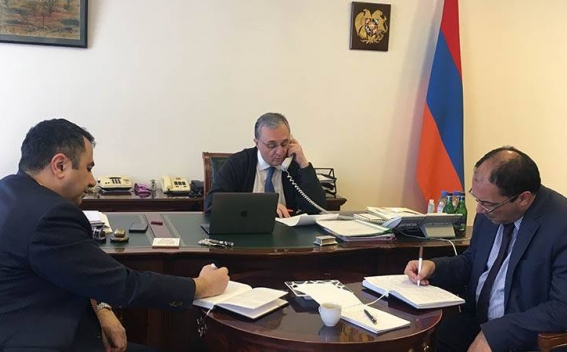 Minister Mnatsakanyan congratulated his Iranian counterpart on the occasion of Nowruz, conveying solidarity and support of the Armenian people to the friendly people of Iran in the fight against the novel Coronavirus.

Presenting the efforts of the Government of Armenia in preventing the further spread of the novel Coronavirus, Minister Mnatsakanyan emphasized the importance of international cooperation in the fight against this pandemic, particularly highlighting the coordination of actions between neighboring countries. In this regard, both sides commended the close cooperation between different ministries and agencies of Armenia and Iran, as well as the continuous exchange of expertise.

During the phone conversation, the Foreign Minister of Armenia highlighted the UN Secretary General’s call on preserving the ceasefire regimes in conflict zones and reconsidering the sanctions’ regimes, stressing that the fight against this pandemic should become an opportunity for reconciliation of peoples and global solidarity.

Foreign Ministers of Armenia and Iran emphasized the mutual willingness to take steps aimed at preserving the dynamics of bilateral agenda, promoting trade in current situation, as well as addressing the issues of ensuring return of the citizens of both countries to their homelands.