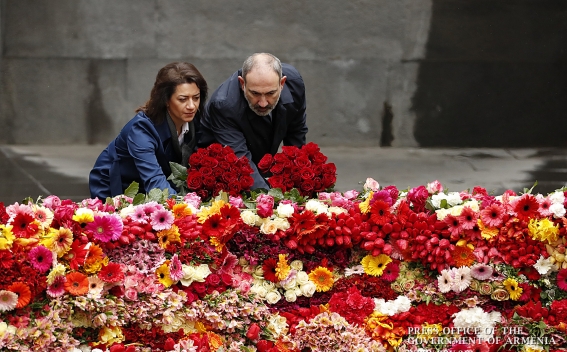 Today, April 24, 2020 marks the 105th anniversary of the Armenian Genocide. Ottoman Turkey’s long-standing policy of Armenophobia culminated in 1915 during the Young Turk government.

Due to the Genocide that had been perpetrated at a state level for many years, Western Armenia was completely emptied of Armenians. 1.5 million of our compatriots were killed, hundreds of thousands of Armenians became refugees, deprived of the right to live in their historical homeland.

Due to the Armenian Genocide, the Armenian people not only suffered enormous human losses, but were subjected to deportation and a cultural genocide. The loss of the spiritual and religious heritage was irreparable; its material damage was enormous.

The Armenian Genocide perpetrated by the Ottoman Empire was a crime not only against our ethnic identity, but also against human civilization. And April 24, 1915, became the strongest symbol of this whole process, because on that very day hundreds of Armenian intellectuals, religious and political figures were arrested, exiled, killed or disappeared by order of the Young Turk government.

For 55 years now, we have been commemorating the victims of the Armenian Genocide on April 24. For the first time, it was marked in 1965, when thousands of Armenians were allowed to hold a mass commemorative event in Yerevan. This was not only due to the “thaw” in the Soviet Union, but also to the fact that in 1946-49 about a hundred thousand Armenians, mostly descendants of Genocide victims, repatriated and became an integral part of Soviet Armenia.

The government of Soviet Armenia decided to declare April 24 a day of remembrance for Genocide victims and to build a memorial in Tsitsernakaberd. That majestic monument became a vivid symbol of our people’s eternity.

At the same time, a movement for the recognition of the Armenian Genocide started in the colonies of the Armenian Diaspora. The movement that spearheaded the political and social structures in the Diaspora for many decades succeeded in many countries owing to advocates’ tireless efforts.

Armenians all over the world are today commemorating the innocent victims of the Armenian Genocide. Why did our feelings failed to fade away after a century, and the memory is now even brighter in our hearts? The answer is simple. More than a century has passed, but the consequences of the Genocide have not been eliminated. Turkey has not yet apologized for what it did. That is why we declare that we remember and demand.

At the same time, we consider that the recognition of the Armenian Genocide is not only our national cause, but it is a matter of global agenda, because April 24 is not only a day of remembrance for our innocent victims, but a day of commemoration of a major crime committed against mankind, a day of calling for the fight against denial, a day of responsibility to prevent other serious crimes against humanity.

And yet, April 24 is first of all the most compelling opportunity to think about the past and the future of our nation, our people, the right moment for self-recognition, for appreciating our strength and the steps to take ahead.

So, what conclusions should we draw from April 24?

First, the Young Turk government issued a death sentence against the Armenian people in 1915 and did everything to enforce that awful decision. The one and a half million sanctified Armenian martyrs strengthened our will to live, create, get stronger, remember and demand; our nation triumphed over death.

The second and equally important consequence is that we are still facing the challenges posed to our people at the outset of the twentieth century. And the only way to effectively defy these challenges is to have a powerful statehood and build an Armenia ready to face security threats.

Yes, we must spare no effort to achieve a lasting peace in the region, to resolve all disputes and conflicts on the basis of mutual respect by means of negotiations and through peaceful means. But only a capable, dignified and sovereign state can defend itself.

Yes, we must spare no effort to deepen our relations with our allies, to make them more institutional and reliable, and to increase the number of our allies in the world. But only a capable, dignified and sovereign state can create a real opportunity to achieve such a result.

In order to have a highly capable, dignified and sovereign state, we need an education system that meets all modern standards, a dynamically developing high-tech economy, a well-established military-industrial complex, a powerful army and special services. By consolidating the pan-Armenian potential around the Armenian statehood we will guarantee our nation’s scientific, diplomatic and economic progress.

To solve this practical problem, we must be able to formulate our national concept, our national ideology, our vision, which will form nationwide consensus on our national values, national goals and national strategy, which will protect, preserve and develop our identity. It will provide guarantees for our competitiveness in the modern world and in the future. In the near future, I will present a draft of such a concept and strategy for a pan-Armenian discussion.

This year we are marking April 24 in exceptional conditions. The new type of coronavirus has placed us all in an unimaginable situation when the 55-year-old April 24 march of hundreds of thousands of citizens shall not be held in a bid to avoid the current epidemic.

First of all, I would like to thank all our compatriots for their understanding of the government’s decision. I should note that our compatriots are facing a similar situation in the Diaspora.

Amid the ongoing crisis, we have tried to find an opportunity to ensure a greater coverage of April 24 events: this year millions of people from around the world will have the opportunity to attend the April 24 march that will take place in a virtual space.

To participate in the march, you must continue to stay at home, and just send your name to the short number 1915, if you are in Armenia, and to +374 33 19 15 00, if you are abroad, which means that your names will be displayed from this evening until dawn on the pillars of Tsitsernakaberd Memorial.

The virtual march will start at 22:00 tonight. It will continue until dawn, and thousands of your foreign friends and acquaintances will have the opportunity to participate in it.

April 24 has been a symbol of our national unity, consolidation and discipline for many years. This symbol must be much stronger, much more visible today, and I am sure it will be such.

We remember and demand!”

Prime Minister Nikol Pashinyan laid a wreath at the Memorial. He joined Mrs. Anna Hakobyan to lay flowers at the Eternal Flame commemorating the victims of the Armenian Genocide. 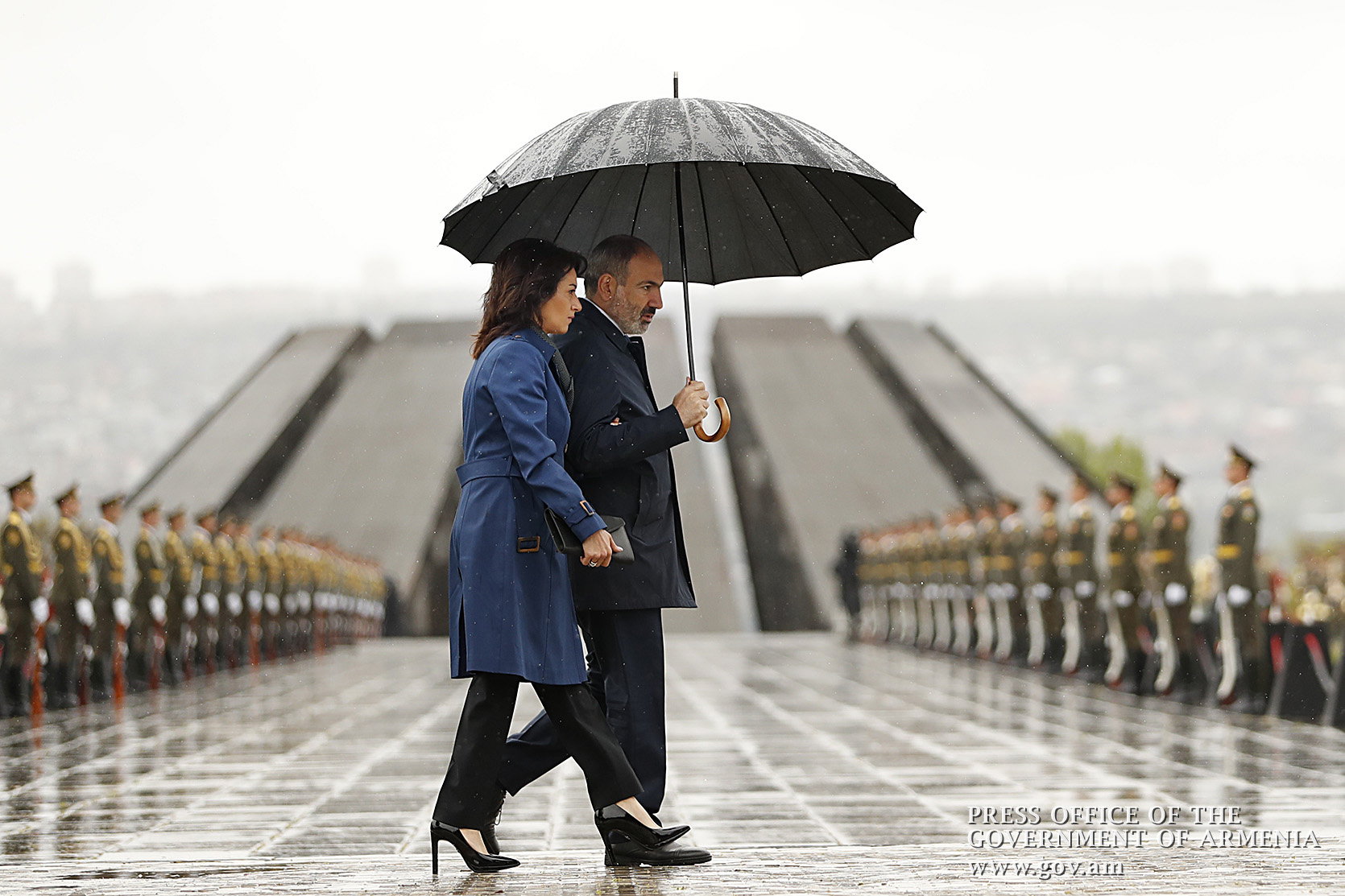 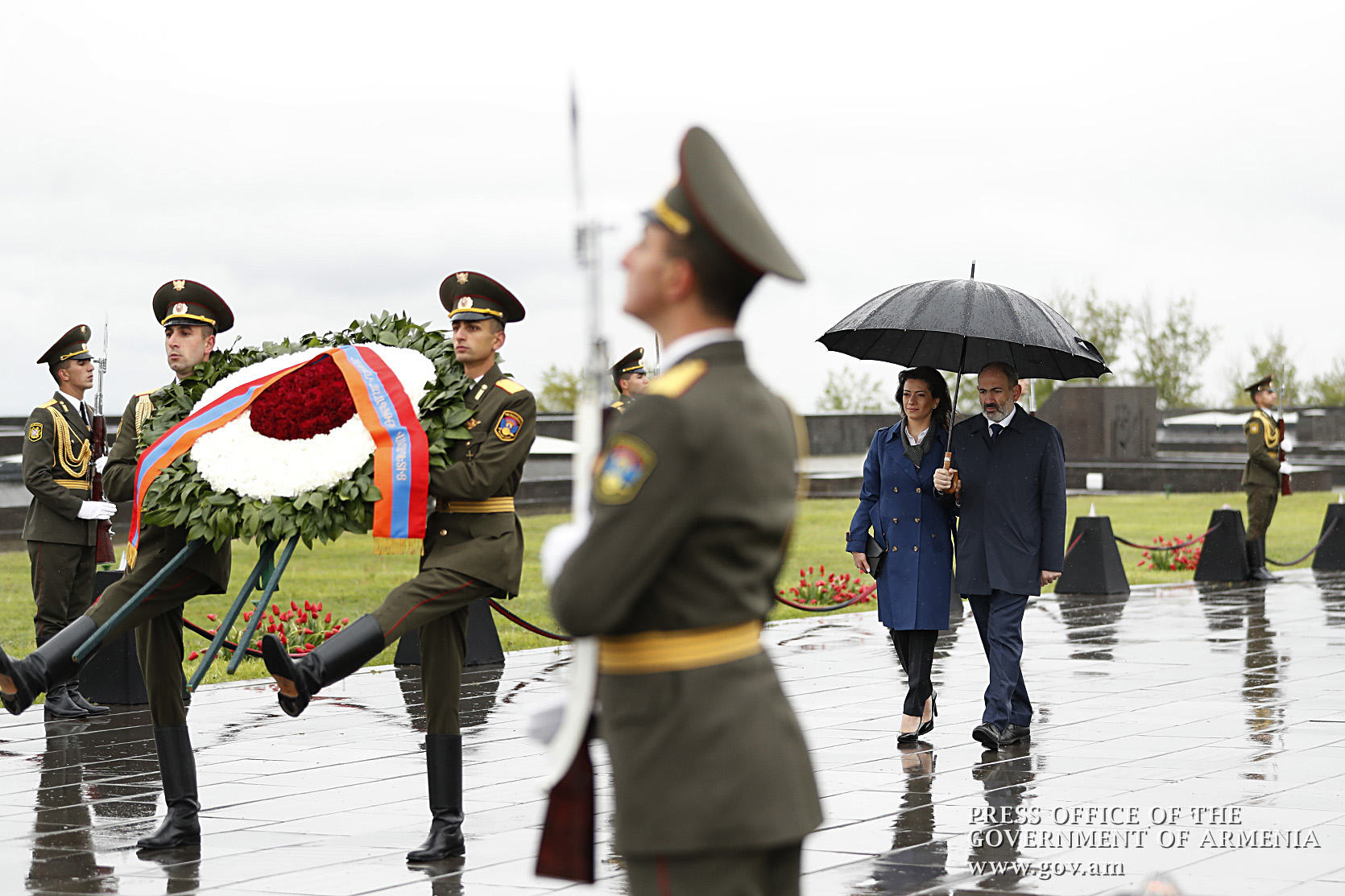 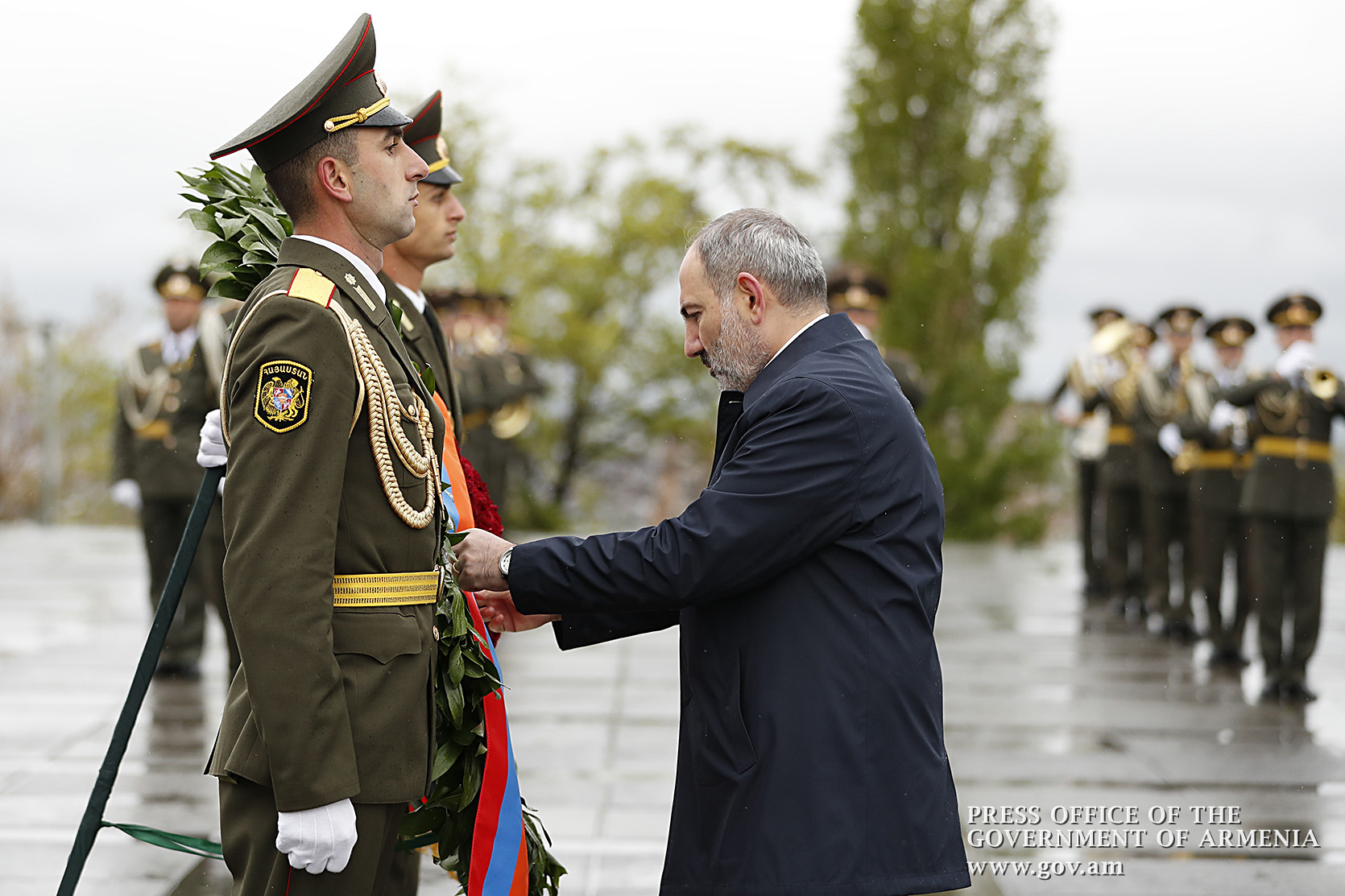 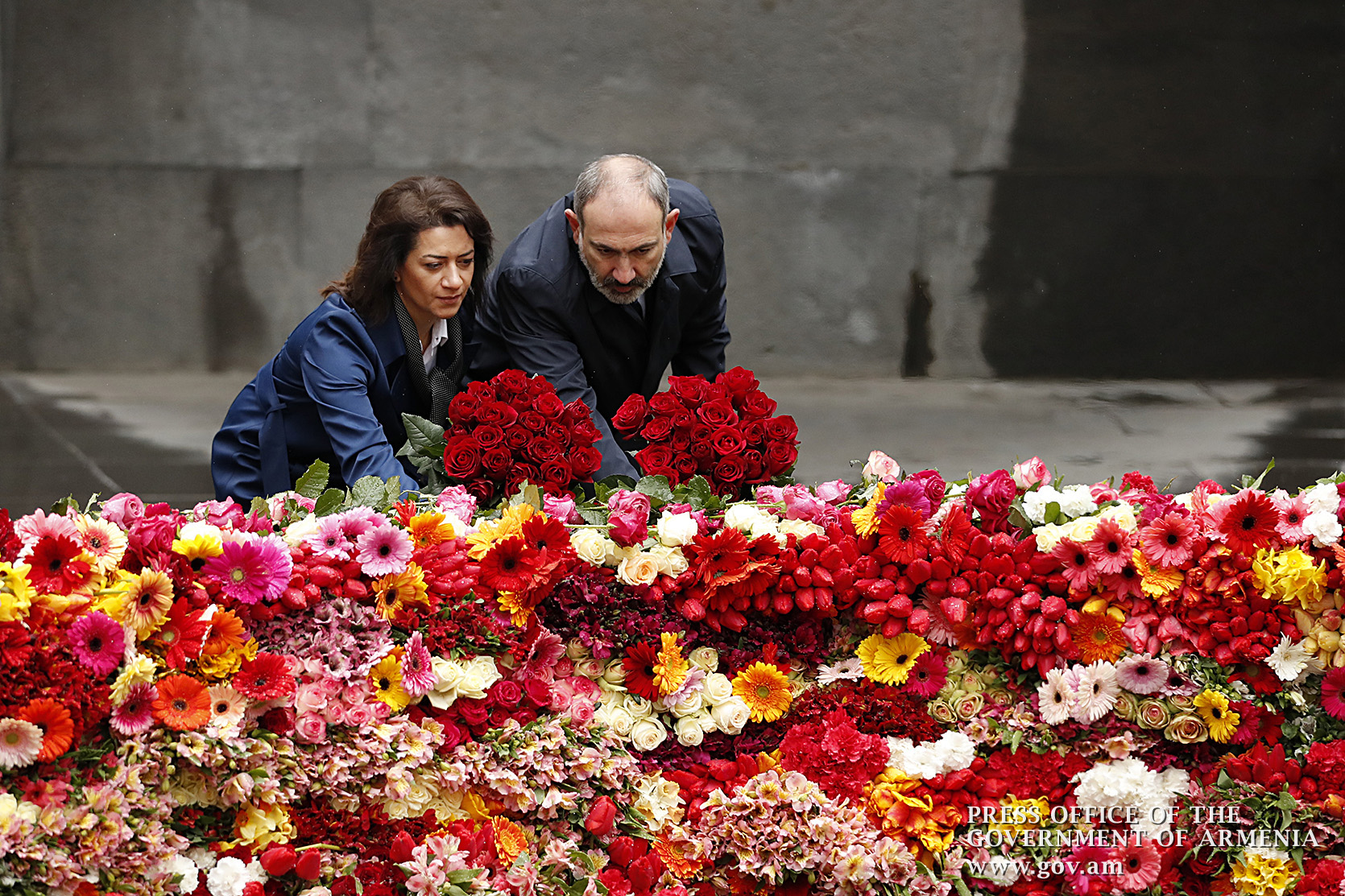 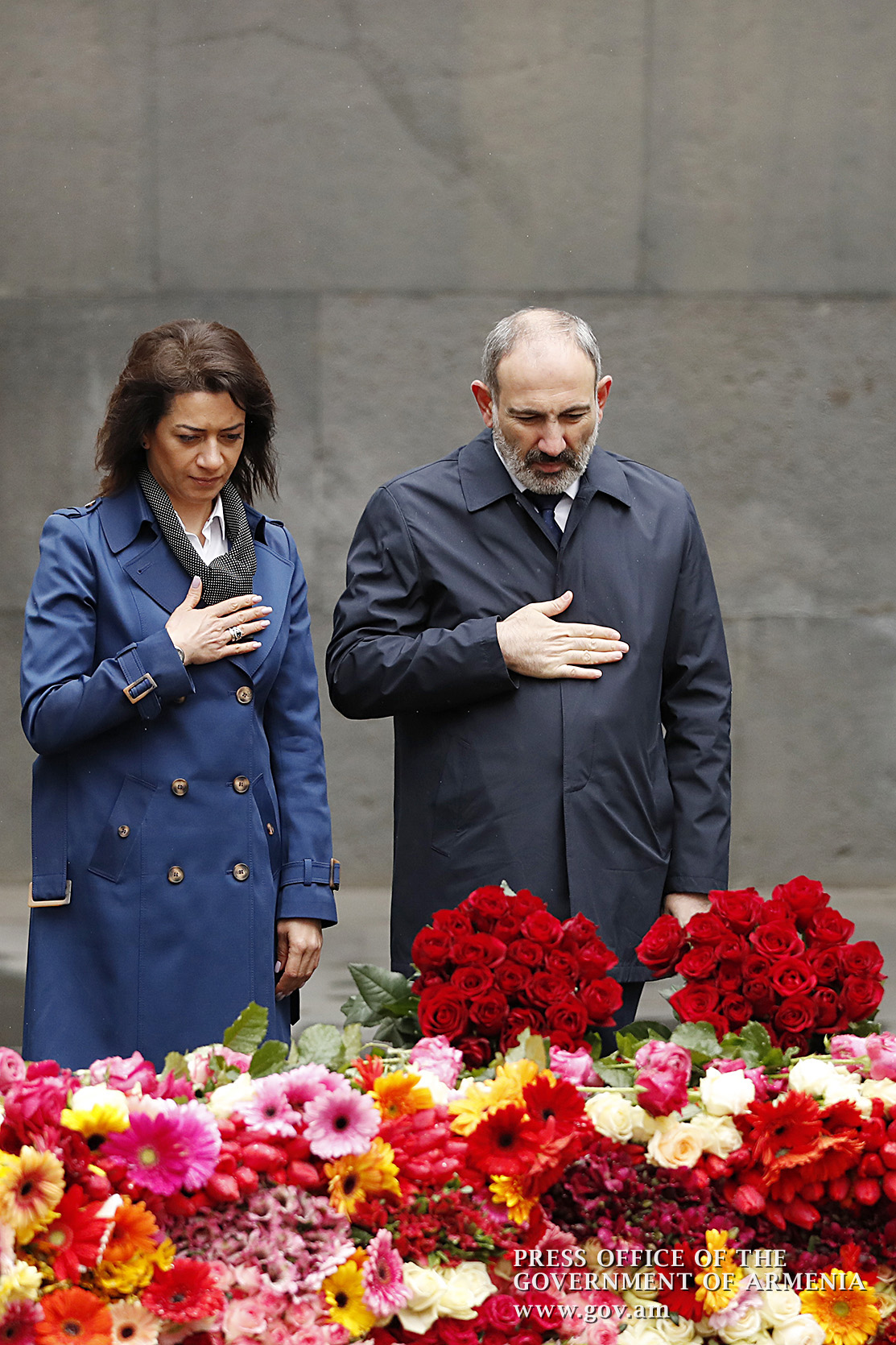 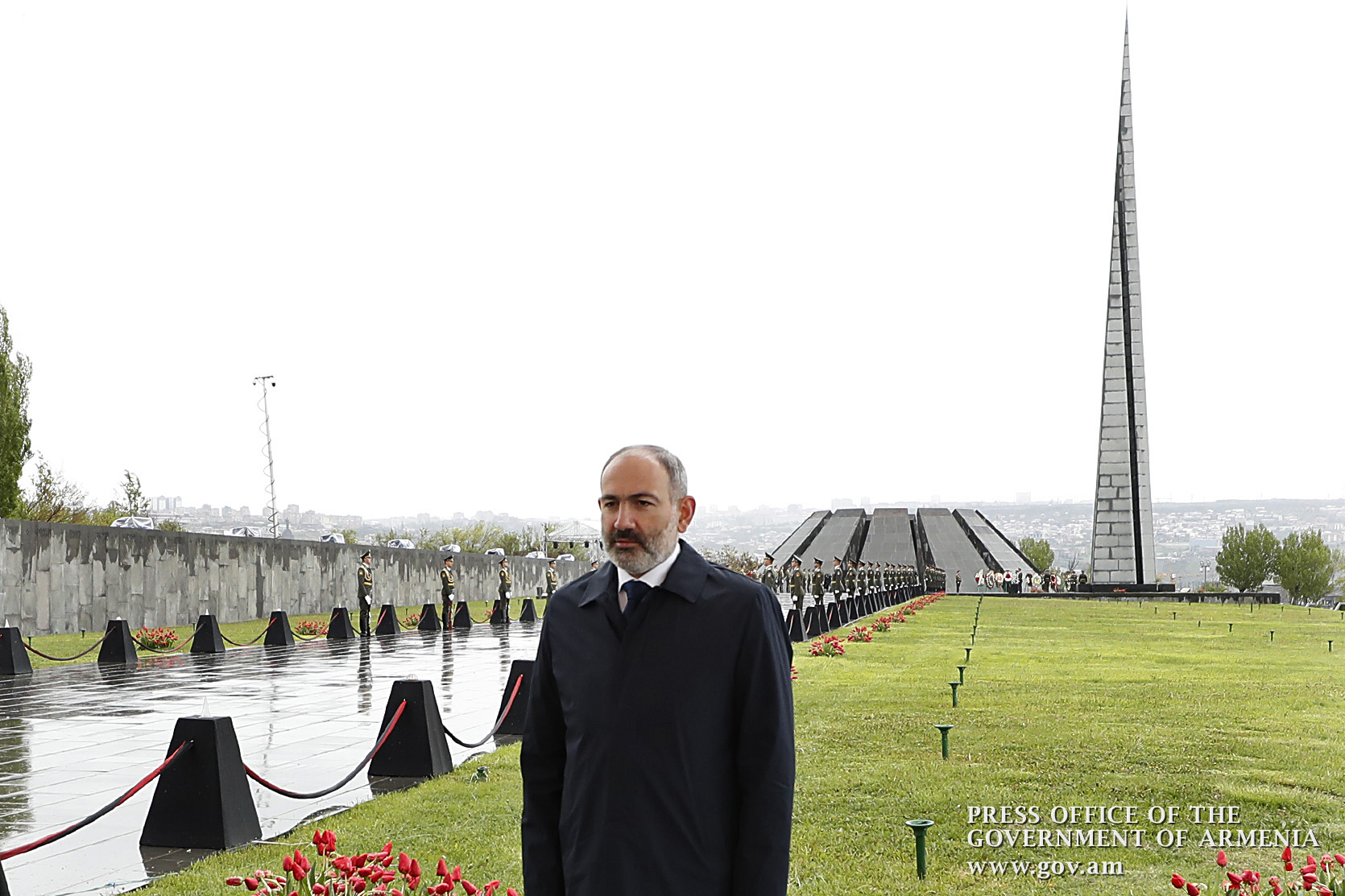 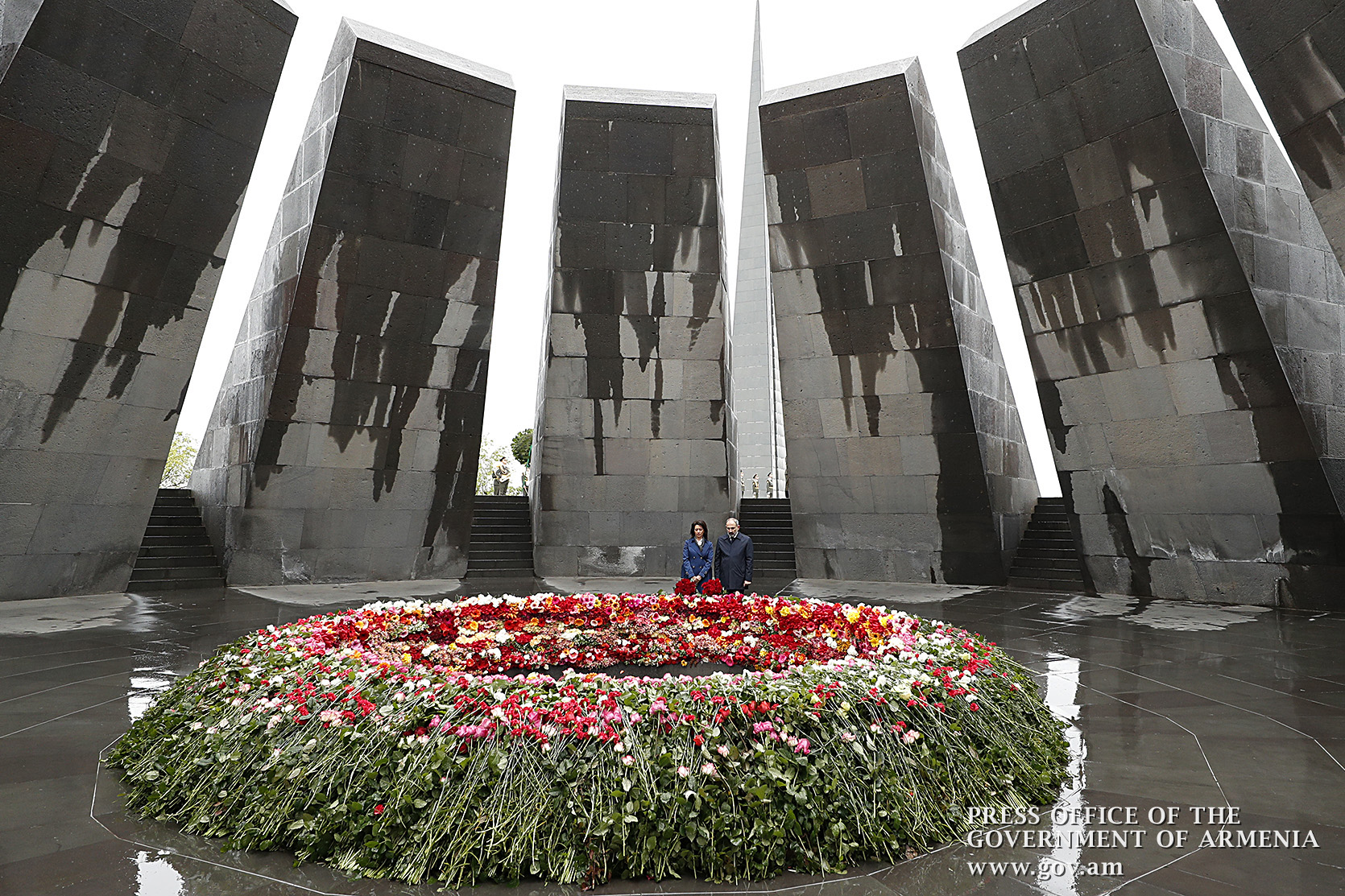