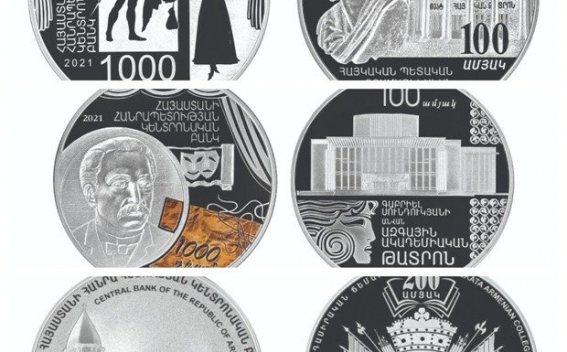 The press service of the Central Bank of Armenia has informed that three collector coins have been issued.

Armenian performances have been organized in Tbilisi, Georgia, since the 1820s. The Armenian theater as a professional structure was founded in 1858 and became a direct successor of the best traditions of the Eastern Armenian theater, undertaking the creation of a new Armenian theatrical art.

In 1921 the theater was organized as an Armenian state drama theater. The opening took place at the Artistic Theater (now the Rustaveli Theater), premiering Octave Mirbeau’s play “Les mauvais bergers” (directed by A. Beroyan). The founders included, among others, I․ Alikhanyan, A. Vruyr, O․ Maysuryan, A. and M․ Beroyans, Zabel, A. Rshtuni. In the first years the performances were given in different theaters of Tbilisi. In 1936 the theater moved to a new building in the Havlabar district (the first performance was “Shahnameh” by Janan), a time when the theater’s creative growth began. During those years, plays by both national and Russian and West-European authors were staged.

In 1955-1991, the theater was named after Stepan Shahumyan and, since 1991, after Petros Adamyan. Many prominent Armenian artists, including V. Papazyan, H. Abelyan, V. Vagharshyan, H. Nersisyan, G. Janibekyan performed at the Armenian State Drama Theater in Tbilisi.

Now the Petros Adamyan Armenian State Drama Theater in Tbilisi is considered one of the main Georgian-Armenian cultural and social centers.

Obverse: a stylized image from Petros Adamyan’s repertoire, symbolizing the role of Hamlet, and an image of an actress.

Reverse: the sculpture of Petros Adamyan (sculptor: Ara Sargsyan) and the graphic image of the theater building.

The coin is minted in the Lithuanian Mint.

The 100th Anniversary of

The first state theater of Armenia was founded in Yerevan, on August 16, 1921. The ceremony opening of the theater took place on January 25, 1922, with a performance of “Pepo” written by Gabriel Sundukyan.

The theater was renamed after Gabriel Sundukyan in 1937.

The theater has brought together best Armenian theatrical figures living in different countries of the world, the artists who were the facade of the Armenian culture of the 20th century. The decades of huge work and enormous efforts has made it the center of Armenian theatrical art. To this day, people still call it “MOTHER THEATER”.

Since its founding up until 1938, the theater operated in one of the central buildings on the Republic Square, then moved to a new place, which is now the English Park. In 1962 the building of the theater burned down. It was rebuilt on the same site and reopened on March 5, 1966.

In 1950-70s, the theater was among the most renowned ones in the entire USSR. This may explain the success of the theater, as the Shakespearean performances - the first Shakespeare festival and conference organized in the USSR - took place in Yerevan.

The Gabriel Sundukyan National Academic Theater has always been home to the creative cooperation of actors and directors of different generations. True to its centuries-old history and traditions, the theater, however, remains young, with unique combinations of the old and the new.

Obverse: the memorial plaque of Gabriel Sundukyan, stylized images of a sheet of paper and thread from the play “Pepo”.

The coin is minted in the Lithuanian Mint.

The 200th Anniversary of Establishment of Armenian College and Philanthropic Academy of Kolkata:

The Armenian College and Philanthropic Academy (ACPA) was established in 1821 in Kolkata (India), in the vicinity of the Armenian Holy Church of Nazareth, at the initiative of the philanthropists A. Muradkhanian and M. Vardanian from Jugha. Over the years Galutsian Armenian School and Davidian Girls’ School joined the ACPA, and a boarding faculty unit was set up. Since 1824, a printing house had been functioning in the ACPA for about 50 years. The Ararat Library was founded in 1828, which had the largest collection of Armenian books and manuscripts of the time.

In 1999, under the decision of the Kolkata Supreme Court, the ACPA was transferred to the trusteeship of the Holy Etchmiadzin in the person of Catholicos of All Armenians, who was granted the right to direct the ACPA’s activity.

The ACPA’s educational programs include the subjects on Armenology and natural sciences and are drawn up in such a way that the graduates receive the opportunity to enter educational institutions of India without difficulties.

In the course of 200 years of functioning, the ACPA has educated thousands of Armenian children from Iran, Iraq, Myanmar, India and Armenia. A great number of academic and cultural programs have been implemented here making educational and cultural ties with the Motherland closer and more comprehensive.

The Armenian College and Philanthropic Academy of Kolkata is an important center for tutoring and upbringing an Armenian background in the Diaspora and one of the most influential educational institutions.

Reverse: the logo of the Armenian College.

The coin is minted in the Lithuanian Mint