Turkey’s Leader Met Two E.U. Presidents. The Woman Among Them Didn’t Get a Chair 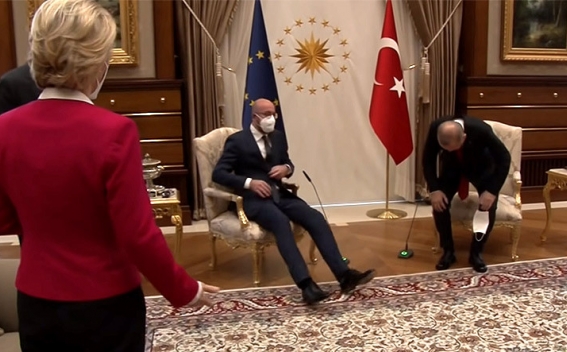 Turkish President Recep Tayyip Erdogan met Tuesday with the European Union’s two presidents, but an awkward moment when the woman among them was left standing caused a bit of a diplomatic stir, The Washington Post reports.

A video of the leaders assembled in an ornate meeting room in Ankara showed Erdogan and European Council President Charles Michel settling themselves into gilded chairs, while European Commission President Ursula von der Leyen appeared unsure of where she was expected to sit.

Von der Leyen stood staring at them, gestured with her right hand and appeared to say "um" or "ehm."

She was ultimately offered a beige couch about 12 feet away, opposite Turkish Foreign Minister Mevlut Cavusoglu, who occupies a lower-status rank in typical diplomatic protocol.

" ‘Ehm’ is the new term for ‘that’s not how EU-Turkey relationship should be’. #GiveHerASeat #EU #Turkey #womensrights," tweeted Sergey Lagodinsky, a German member of the European Parliament, who is chair of the legislature’s delegation to a joint E.U.-Turkish parliamentary committee.

"It wasn’t a coincidence it was deliberate," she wrote on Twitter, where some people explained away the incident as more about social distancing than protocol. "Why was @eucopresident silent?" she wrote, using Michel’s Twitter handle to ask why he didn’t offer his fancier seat to his counterpart.