The Prime Minister Awards the 10 Best Athletes of the Year 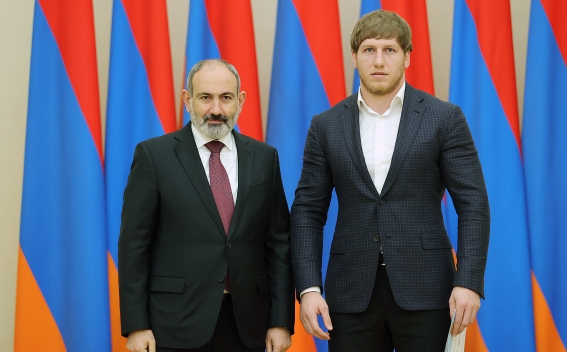 Prime Minister Nikol Pashinyan participated in the solemn awarding ceremony of the 10 best athletes of 2021. The event was attended by the Chief of Staff of the Prime Minister Arayik Harutyunyan, Minister of Education, Science, Culture and Sports Vahram Dumanyan, Deputy Minister of Education, Science, Culture and Sports Karen Giloyan, Secretary General of the National Olympic Committee of Armenia Hrachya Rostomyan, numerous representatives of Armenian sports.

“Dear representatives of the sports community,

First of all, I would like to thank all of you for the competions you participated in in 2021, especially for the victories ones.

You know that particularly in 2021 all of us, our society had twice greater need for victories. And in the socio-psychological situation that has been established in the Republic of Armenia after the 44-day war, sports performances are gaining more importance and significance at the state and national levels. In this respect, especially the competitions of 2021, the participation in those competitions, the successes registered in those competitions deserve double appreciation.

Success in the field of professional sports stimulates more and more people to go in for sports, which in turn results in several effects inside the country, starting from the general public health, because we should record that in our country more than 100 billion AMD is spent from the state budget on healthcare. But I want to emphasize that most of that money is spent on treating people, not preventing disease. And sport is one of the factors that will help us overcome this problem.

Today we have a serious problem in terms of maintaining the health of our youngsters, and the achievements in professional sports, our famous athletes, I think, should encourage youngsters to do sports. This is also behind the political course we have adopted, we have promised that those who will conquer the title of an Olympic champion, we will build sports schools in their name in the settlements they want. At the same time, we do this not only to pay tribute to our athletes, but we are convinced that such sport centers will be more attractive for young people to go there and do sports and physical culture.

Once again, I want to thank all the coaches, all the athletes, to assure once again that sport is really a strategic direction for our development. In the recent years, I think the Government's expenditures in this area are very noticeable, although we understand that there is still a lot to do, I am confident that, depending on the situation, we will continue the program of capital investments for the development of sports. We hope that it will help all of you to represent Armenia in international arenas with more and more tangible success, and the Armenian flag will be raised more and more often in different parts of the world, the anthem of Armenia will be heard more and more often, more and more rejoicing people will meet you at Zvartnots airport.

The prize fund of the "Top 10 athletes of the year" contest is 50 million AMD. Each athlete included in the top ten will receive 4 million AMD, and 1 million AMD will be allocated to the members of their coaching staff.