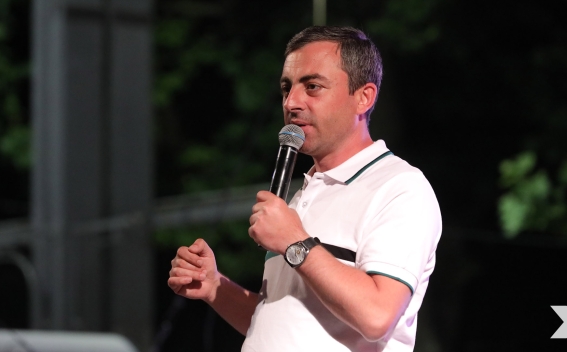 Representatives of the Resistance Movement today met with more than two dozen non-parliamentary forces and discussed the statement of the Movement regarding Artsakh, around which they expressed their position, Ishkhan Saghatelyan, vice-speaker of the Armenian parliament from the opposition, told reporters, News.am reports.

He said that there were political forces to which they appealed, but those, for various reasons, were not present at the meeting.

Until the evening, we will sum up the results of the first stage of consultations and publish a list of those parties that spoke in favor of the principles and positions promulgated by the Resistance Movement on the Artsakh issue, the vice speaker said.

"At this point, I can say that almost all the forces present were in this mood (meaning that they were "for" - ed.)," Saghatelyan said, adding that only this issue was on the agenda of today's discussion.

The Vice Speaker of the Armenian Parliament from the opposition noted that they attach great importance to this format of dialogue with non-parliamentary forces, adding that such consultations will be periodic.

"We will summarize everything and report on the final results," the oppositionist noted. He also added that there are parties that, having read the text of the statement, asked for time for discussion, after which they will present their positions, although at least no one from the forces present objected.

Saghatelyan also informed that an agreement was reached to hold a meeting on this issue with an even larger number of invited forces, since there were quite interesting proposals from the participants.

When asked on the basis of what principles non-parliamentary forces were invited, the oppositionist said that, with the exception of a few forces that became servants of the Civil Contract party, everyone was invited.