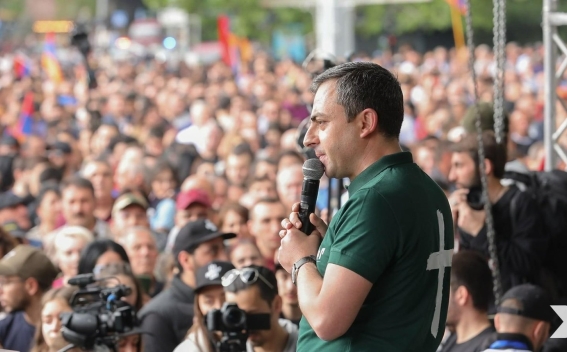 The protest movement launched by the Armenian opposition is nearing a tipping point, one of its leaders and deputy parliament speaker Ishkhan Saghatelyan said on Thursday, Panorama.am reports.

The two opposition blocs represented in the Armenian parliament have called a special session on Friday to debate a draft resolution concerning Artsakh, a peace deal with Azerbaijan and relations with Turkey. However, the ruling Civil Contract party has unveiled plans to boycott the session.

“A special parliament session is scheduled at 4pm tomorrow. We will go to the parliament. Until then, everyone has the opportunity to express their position," Saghatelyan said in a statement.

“That chance still exists for most of them. They can still avoid moral responsibility for this shameful process of surrendering the country to the enemy and destroying the statehood. They can still distance themselves from Nikol [Pashinyan],” he added.

Saghatelyan urged people to gather in Yerevan’s France Square to support the opposition MPs. “Depending on the processes in parliament, we will outline our further steps,” the opposition leader said.

"Tomorrow we will all know the names of the figures who have made their choice in the Artsakh issue and Armenian-Turkish relations.

“We are on the right path. The struggle must be brought to a victorious end,” he added.