What Promised Netanyahu to Jewish Home for Forming Coalition? 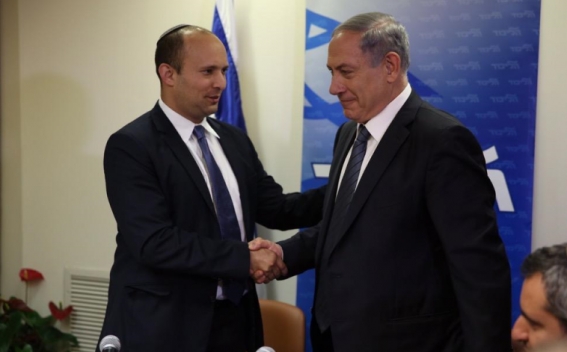 Around an hour before the deadline for forming a coalition, the Prime Minister Benjamin Netanyahu declared that the talks for forming a coalition have ended successfully. Coalition was formed with right-wing Jewish Home party. "During the last couple of weeks, I'm sure nobody has been surprised that these negotiations have gone on with all of the different members of the coalition," – CNN quotes Netanyahu’s words referring to Israel Radio.

The deal with Jewish Home secured Netanyahu with the needed 61-seat ruling government. According to the deal, as The Times of Israel informs, Jewish Home will receive the education, justice and agriculture portfolios, the leadership of the Knesset’s Constitution, Law and Justice Committee and control over the World Zionist Organization’s Settlement Division. The pact also includes promises for the protection of transportation over the Green Line.

As the source reports, on May 11, the government will vote for expanding the cabinet from 18 to 22 ministers.

The formation of the coalition was welcomed by the President of the US Barack Obama, who, in a statement issued by the White House, said is looking forward to working with Netanyahu. He has especially emphasized the importance of military, intelligence, and security cooperation with Israel. Of course, 2 important issues could not be left out from the statement – Iran nuclear program and the two-state solution – issues of much debate. In this regard Obama said: "We also look forward to continuing consultations on a range of regional issues, including international negotiations to prevent Iran from acquiring a nuclear weapon and the importance of pursuing a two-state solution."

Of course, it was very important for Netanyahu to form a coalition, no matter the price he "paid" for it, otherwise he would cease to be the Prime Minister of the country and the President of Israel would ask someone else to try to form the new government. Maybe, this is why the promises Netanyahu gave the Jewish Home were so generous…