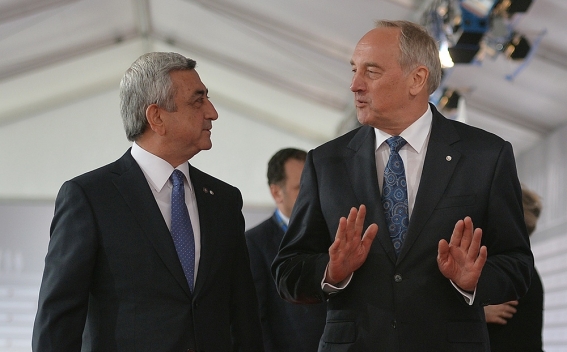 The two countries’ presidents greatly appreciated the political dialogue between Armenia and Latvia which has been developing in the spirit of mutual understanding, and the dynamics of interstate relations, and stressed the importance of boosting that dynamics. Apart from the bilateral agenda, Serzh Sargsyan and Andris Bērziņš discussed issues pertaining to the further course of cooperation between the European Union and the Republic of Armenia.

At the meeting, the Latvian president noted that he considers Armenia’s decision to join the Eurasian Economic Union pragmatic and welcomed the RA’s balanced multilateral approach. According to him, presently the EU has started to value its effectiveness and usefulness more and more.

President Serzh Sargsyan underscored that Armenia also seeks to promote economic relations with the friendly country of Latvia. The president reiterated Armenia’s commitment to the implementation of reforms based on common principles and to the enhancement of democracy in the country.

The presidents also reflected upon regional issues and challenges present in the South Caucasus.