Hovik Abrahamyan: Armenia May Provide a Good Platform for a Dialogue Between Iran and the EEU 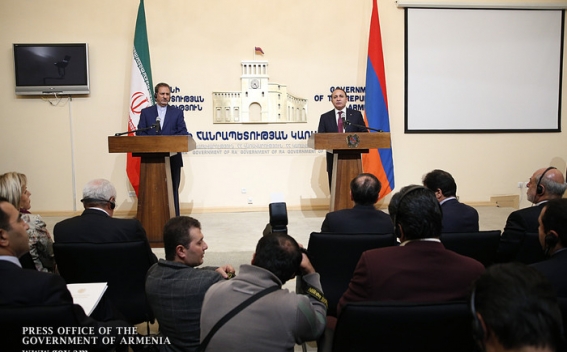 After a private interview held between the Prime Minister of Armenia and the Iranian First Vice President, the two countries’ official delegations met on expanded format, at which they discussed a wide range of issues related to Armenian-Iranian friendly relations.

Welcoming the First Vice President of Iran and his delegation, the Prime Minister said:

“I have warm memories of my visit to Iran last year, which was a good opportunity to discuss in detail issues of mutual interest. We have repeatedly stressed the need for continued development of friendly relationship with the neighboring Iran. Iran is our important partner, with which we have a hectic agenda of cooperation.”

Hovik Abrahamyan expressed confidence that the Iranian First Vice President’s visit will help summarize the set of activities aimed at implementing the agreements reached so far and outline the next steps. Thankful for the invitation to visit Armenia, Es’haq Jahangiri said to be pleased with his stay in a friendly country.

“Armenia and Iran enjoy centuries-old friendly relations that have always been at the heart of the friendship between our two countries. The Republic of Armenia has a special place in Iran’s foreign policy, and we have no restrictions in terms of developing our relations with Armenia. During your last year’s visit to Iran, we agreed to meet in Yerevan and Tehran on a yearly basis in order to discuss and solve the outstanding issues,” Iran’s First Vice President said.

Hovik Abrahamyan and Es’haq Jahangiri first of all expressed satisfaction at the positive outcome of the talks over Iran’s nuclear program and the arrangements made on the matter, underlining that they will serve the interests of regional and international security and sustainable development.

Stating that Armenia and Iran entertain a high-level political dialogue, the parties stressed the need to continue joint efforts toward realizing the great potential of bilateral economic cooperation and trade relations. In this context, Hovik Abrahamyan and Eshaq Jahangiri stressed the importance of the Armenian-Iranian business forum due to be held on October 15 in Yerevan.

During the meeting the parties discussed a wide range of issues related to the expansion of trade and economic relations, energy projects, transport infrastructure. They looked at ways of deepening cooperation in tourism and culture. Pleased with the start of construction work on third Armenia-Iran high-voltage transmission line, Es’haq Jahangiri and Hovik Abrahamyan expressed confidence that the activities will be proceed according to timetable and will be complete in 2018.

The Prime Minister of Armenia attached great importance to this project because the transmission line will enable our country to increase the level of gas-energy exchanges in 2018. The interlocutors further discussed progress in the construction of Meghri HPP.

The importance of the Armenian-Iranian intergovernmental commission was emphasized on either side in addition to regular contacts, which can promote trade and economic ties between the two countries.

The interlocutors next touched upon Armenia’s accession to the Eurasian Economic Union and Iran-EEU relations. Prime Minister Abrahamyan said Armenia may provide a good platform for cooperation and expressed readiness on behalf of the Armenian government to promote a dialogue between Iran and the EEU on economic matters. Then the co-chairs of the Armenian-Iranian intergovernmental commission reported back progress in the implementation of bilateral agreements.

The respective ministers reported progress in the development of transport infrastructures and historical-cultural ties. They stressed that effective cooperation is established, activities are conducted according to the timetable, and all outstanding issues are addressed through permanent contact between the sides.

In this context, Iran’s First Vice President and the Prime Minister of Armenia referred to road infrastructure projects, including the North-South Road Corridor Investment Program and the Armenia-Iran railway project, underlining their importance as to the improvement of regional cooperation and economic growth. The interlocutors stressed the importance of cooperation in the sphere of culture and rich historical and cultural heritage.

In conclusion, Hovik Abrahamyan and Es’haq Jahangiri reaffirmed their readiness to build on the ongoing mutually beneficial cooperation. The First Vice President-led Iranian delegation was offered an official dinner on behalf of the Prime Minister of the Republic of Armenia.