RA FM: the Government of Armenia is Committed to Advancing the Reforms Aimed at Development 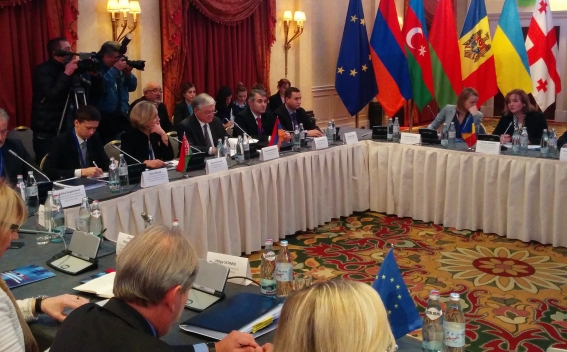 On November 26 the Foreign Minister of Armenia Edward Nalbandian took part at the Eastern Partnership informal Ministerial meeting in Tbilisi, where he came up with a speech, the Press Service of the RA FM reports. His speech reads as follows:

The European Neighborhood Policy has played a substantial role in promoting and deepening the cooperation between Armenia and the EU. We highly appreciate the EU’s continued support and assistance provided to our country over the years, which has been instrumental for the effective implementation and sustainability of the reform process and institutional capacity building in Armenia.

Armenia welcomed the European Neighborhood Policy review process. We highly appreciated the initiative of High Representative Mogherini and Commissioner Hahn to engage the partner countries in this process. We are pleased to note that the outcome of the EU Council deliberations of the last week duly reflected the principle of differentiation to be applied to the partners, taking into account the progress made in implementation of their commitments in the areas of democratic reforms.

I would like to use this opportunity to thank you, Johannes, and ask you to convey my gratitude also to Federica for your joint letter on the ENP review process that I have received a week ago and assure that we share the ideas contained therein.

Since our last meeting in Minsk some important developments have taken place. I would like to note with satisfaction, the decision of the EU Council authorizing the European Commission and the High Representative to open negotiations on a new agreement with Armenia.

The negotiations will be launched in coming days and I am hopeful that through the active process of deliberations we will be able to reach an agreement on a new framework document that will reflect the essence and depth of our bilateral relations and set new guidelines for mutually beneficial cooperation.

Following the successful negotiations of last month, we look forward to signing in coming days the agreements on Armenia’s participation in a number of EU programs, such as "Horizon 2020", and the Program for Competitiveness of Small and Medium Enterprises (COSME). In the area of transport, the Government of Armenia has expressed its readiness to conclude a common aviation agreement, following the liberalization of the aviation market through the Open Skies Policy.

We attach great importance to people to people contacts, and view enhanced mobility of our citizens as an important prerequisite for bringing our societies closer. It is almost two years now that the EU-Armenia Visa Facilitation and Readmission agreements are being implemented. We do believe that it is high time to move further and launch a dialogue on visa liberalization with an understanding that this is a reform oriented process.

The Government of Armenia is committed to advancing the reforms aimed at development and consolidation of the democratic institutions and good governance, protection and promotion of human rights, strengthening the rule of law and the independence of judiciary. With this in mind, the President of Armenia has initiated the process of constitutional reform. If approved in referendum on December 6 it will transform Armenia’s semi-presidential model of governance into the parliamentary one.

Armenia well recognizes the importance of inclusive cooperation in different formats. We hold the view that it is possible to make best use of various integration frameworks employing more visionary approach. Since our joining the Eurasian Economic Union, and even before, we have been advocating for a rationale that builds on opportunities provided by different integration formats while avoiding undue creation of new dividing lines in the larger neighborhood. We want to make best use of our participation in the Eurasian Economic Union and at the same time develop mutually beneficial possible cooperation with the European Union.

We look forward to advancing our efforts in the framework of both Eastern Partnership and European Neighborhood Policy and we are confident that we will continue to proceed in the right direction, based on shared values and respect of each other’s decisions and choices.