Who Does Western Media Blame for the Islamic State? 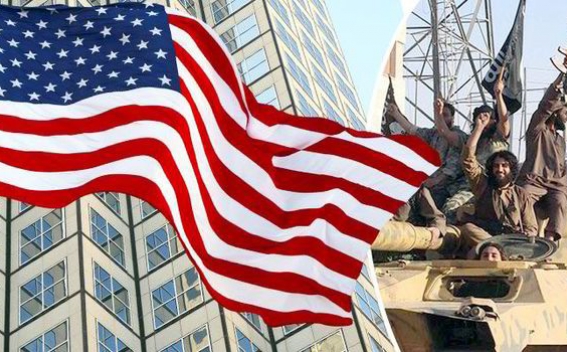 Recently an article was published by the Washington Post, in which it is said:

"The de-Baathification law promulgated by L.­ Paul Bremer, Iraq’s American ruler in 2003, has long been identified as one of the contributors to the original insurgency. At a stroke, 400,000 members of the defeated Iraqi army were barred from government employment, denied pensions — and also allowed to keep their guns".

Similar explanation is brought also in the article published by the New York Times in which it is particularly stated:

"First known as the Islamic State in Iraq and Syria, members of ISIS fought with Al Qaeda in Iraq against American troops in a sectarian insurgency that helped drive the country into civil war in 2006 and 2007. An alliance of tribal fighters and coalition troops handed the group a series of defeats, but it found fertile ground for a revival in the vast, stateless territories of northern and eastern Syria that fell into the hands of rebels fighting President Bashar al-Assad in 2013 and 2014".

The Guardian cites a document revealed this year by the leaked US intelligence report, written in 2012, in which it is stated that al-Qaida in Iraq (which became Isis) and fellow Salafists as the "major forces driving the insurgency in Syria" – and states that "western countries, the Gulf states and Turkey" were supporting the opposition’s efforts to take control of eastern Syria.

Truth Dig goes even deeper in the history connecting the roots of the present Islamic State terrorist organization with the war in Afghanistan.

"The causal chain begins with the role of the U.S. in creating a mujahedeen force to fight the Soviets in Afghanistan in the 1980s. Osama bin Laden was a key facilitator in training that force in Afghanistan. Without that reckless U.S. policy, the blowback of the later creation of al-Qaida would very likely not have occurred," the news agency writes.

To sum up it is to be stated that for the Western media, at least for few leading agencies, it is not a secret any longer that the politics of the US in the Middle East and the resulting vacuum of power, contributed to the emergence of the extremist forces in the region. Was it a deliberate politics with precise intention? We leave this question to our readers to answer.