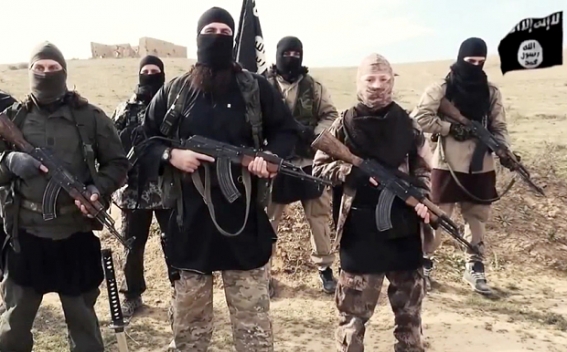 One of ISIS's top commanders is believed to have been killed by an Iraqi airstrike in the city of Barwana, the country's army has said.

He was also a fugitive from Abu Ghraib prison and a former prisoner in Camp Bucca, a spokesman of the Iraqi Joint Operations Command, Col. Mohammed Ibrahim, told CNN.

Al-Adnani, earmarked as the group's next leader, was reported as having lost 'a large amount of blood' after being hit in the town of Barwanah, in the Anbar province, yesterday.

He was moved to the city of Hit for initial treatment before being transferred to Mosul flanked by security guards, CNN reported.

A spokesman for Iraq's Joint Operations Command confirmed that they had been following Adnani's movements for well over a month before he was injured on Thursday in what is believed to have been a targeted attack.

Adnani is considered the terror network's most prominent public figure in Iraq, having made several audio recordings which have been posted online.

Adnani was held in custody - believed to have been at the American detention facility, Camp Bucca - after being captured by US troops in 2005, remaining a prisoner until 2010.

In June of that year, he declared a 'caliphate' for parts of Syria and Iraq indicating ISIS' aim of not just being a terrorist group, but a governing body.