Rise Of Anti-Islamic Moods in Europe 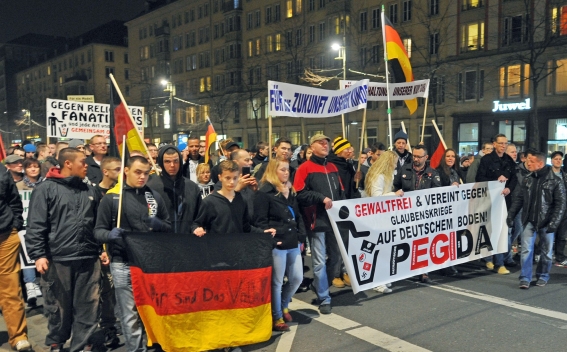 In parallel to the migration crisis there is a rising wave of protests against the mass influx of migrants in a number of cities of Europe organized by the German extremist right wing "PEGIDA" movement.  At present the ideology of the movement is largely spread both in Germany and in a number of the European cities.

As Euronews reports, the numbers of the followers of the Patriotic Europeans Against the Islamization of the West has reached around 8,000. The proof is the recent protests by the participation of thousands people in Dresden in parallel to which there was also a protest of the opponents of the right wing movement.

According to Deutsche Welle,  "PEGIDA" and similar other movements intend to organize protests against islamization in the 14 countries of Europe.

In the "silent march" in Birmingham, England, organized by Tommy Robinson, former founder of the English Defense League,  around 200 followers of "PEGIDA" movement participated, BBC informs.

The protests against Muslim migrants took place also in the capital of Poland, Warsaw. According to  Irib World Service, the number of protesters reached to 1,000. In the French Calais, which has become a transit zone to Great Britain for thousand of migrants, the police dispersed another anti-migration rally.  In Dublin also  anti-migration protest by "PEGIDA" movement was organized, which however was not so crowded.

PEGIDA - Patriotic Europeans against the Islamization of the West German extremist right wing movement started in Dresden by a political activist, the head of German anti-migration movement Lutz Bachmann. The movement under the slogan "For civil consciousness and responsibility" has been organizing protests against the Islamization of the Europe since October of 2014 aiming at influencing the German migration policy.

Despite the accusations of "the right wing extremists" the main part of the extremists represents the working, middle German class. The slogans in the protest organized this week were "For the preservation of culture," "Against religious extremism." Taking into consideration the dissemination of the protests in different cities of Germany, as well as the ongoing increase in the number of "PEGIDA" movement followers there is a grounded concern that the movement can acquire pan- German nature.

However, the German government negatively reacts to the anti-migration moods present in the country. German Chancellor Angela Merkel declared for many times that Islam was a part of Germany and she was even ready to join protest movements organized by Muslims. Merkel also criticized PEGIDA movement at the same time pointing that everybody has a right to free expression and the protests against migrants cannot have any role in Germany.

In contrast, Bernd Lucke, the leader of the opposition political party "Alternative for Germany", considers the position of "PEGIDA" movement legitimate.  According to him the concern of thousands of people is perceivable for politicians.

Despite various opinions the recent developments in Germany, sexual assaults in Cologne on December 31, the ongoing rise of migration influx and the inability of the government to give immediate reaction to social political problems, make the worry of the followers of "PEGIDA" movement reasonable. The present situation can be considered the clash of civilizations (clash of religions, cultures, values and etc.), while anti-migration rhetoric as weakened liberal values.

At present multi-ethnic and multi cultural Europe needs to develop a new strategy which will ensure the peaceful co-existence of the representatives of different cultures, otherwise we will witness sharp increase of extremist anti-Islamic moods in Europe, which will threaten the values of Europe with the long-centuries history of civilization.