Nalbandian: Both Armenia and EU View the Implementation of the Readmission and Visa Facilitation Agreements as Overall Successful 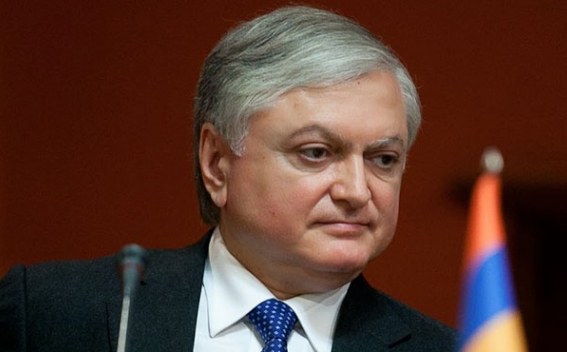 The RA Foreign Minister Edward Nalbandian, who is participating at the 7th European Union and Eastern Partnership Foreign Ministers’ Meeting, came up with a statement, which, according to the press service of the RA MFA, reads as follows:

I would like to thank the High Representative Mogherini and Commissioner Hahn for organizing this meeting.

Since our last Ministerial significant developments have taken place. We had the successful Riga Summit with the Joint Declaration that reaffirmed our shared vision of the Partnership based on mutual interests and commitments and highlighted the main directions for further developing and strengthening of comprehensive cooperation in all areas of mutual interest.

The 2015 was a special year for the Armenia-EU cooperation. Last December I had the privilege together with High Representative Mogherini to officially launch the negotiations on a new comprehensive agreement between Armenia and the European Union. It will enable us to lay a new legal foundation for our relations based on shared values and respect for each other’s decisions and choices. The new agreement will reflect the depth and essence of our bilateral relations and set new guidelines for mutually beneficial comprehensive deep partnership. Three rounds of negotiations have already taken place.

In 2015 we witnessed an intense and constructive dialogue with a large number of bilateral meetings and high level visits. President Tusk and Commissioner Hahn visited Armenia in 2015 and recently High Representative Mogherini was in Yerevan. We have participated in a number of meetings of the Eastern Partnership and EU-Armenia partnership structures.

It was also last December, that the EU Council has presented the Revised European Neighborhood Policy - the cornerstone of our multilateral cooperation for the years to come. When the EU Council endorsed the Revised Policy, we were pleased to note that the principle of differentiation and tailor-made approach would be duly applied to the partners, taking into account the progress made in the implementation of their commitments in the area of democratic reforms.

The European Neighborhood Policy has played a substantial role in promoting and deepening cooperation between Armenia and the EU. We highly appreciate the EU’s continued support and assistance provided to our country over the years, which has been instrumental for the effective implementation and sustainability of the reform process and institutional capacity building in Armenia.

The Riga Summit also reiterated full support to the efforts of the OSCE Minsk Group Co-Chairs on the peaceful settlement of the Nagorno-Karabakh conflict, based on the five statements of Presidents of the Minsk Group Co-Chair countries adopted since 2009. Most of us remember how Azerbaijan tried to block the Riga Summit Declaration because of the reference to these statements. This fact alone vividly demonstrates Azerbaijan’s ignorance to the proposals of the mediator countries made on behalf of the international community.

The meeting of the Presidents of Armenia and Azerbaijan held last week in Vienna was a productive one with the concrete agreements and commitments, including unconditional implementation of 1994-1995 cease-fire agreements, creation of investigation mechanism, and enhance the capacities of the office of the Personal Representative of the OSCE Chairperson-in-Office.

Regrettably, only days after the meeting Azerbaijani officials are making futile attempts to cast doubt on its outcome, presenting their own distorted interpretations contradicting the statement made on the results of the meeting by the high representatives of the Co-Chair countries. By fabricated accusations, Baku is trying to distract the attention of the international community from crimes committed by Azerbaijani Armed Forces, the vivid facts of the gross violations by Azerbaijan of the International Humanitarian Law and International Human Rights Law.

Armenia together with the Co-Chair countries will do its utmost for the implementation of the agreements reached in Vienna and to continue efforts for the exclusively peaceful settlement of the Nagorno-Karabakh conflict.

We strongly believe that founded on shared ownership, responsibility, differentiation and mutual accountability Eastern Partnership contributes to strengthening democracy and market economies, improving macroeconomic stability and the business environment, as well as enhancing mobility and people-to-people contacts, which open new prospects for multilateral cooperation and enable us to make a better use of our capabilities.

Armenia has been actively implementing provisions of the Riga Summit Declaration, including the ones related to the sectoral cooperation. Agreement on the participation of Armenia in the COSME Programme for small and medium-sized enterprises, was signed last year. Several days ago Armenia joined the Horizon 2020 public funding programme for research and innovation. Enhancing cooperation in the transport area is also on our agenda and we expect early start of negotiations on establishing a Common Aviation Area.

Armenian students are actively benefiting from Erasmus+ and we are looking forward to enlarge cooperation aimed at capacity building activities relevant for Bologna Process. Ministerial Conference on European Higher Education Area which took place in Yerevan last year provided a good opportunity for further actions in this direction. We also have started discussion on joining Creative Europe Programme, which offers a broader frame for cultural exchanges.

Armenia values EU’s assistance to the agro-food sector and is looking forward to increased cooperation in promoting modernization and further reforms in agriculture and rural development, also within ENPARD programs.

The enhanced mobility remains one of the important prerequisites for making our societies closer. The recent Armenia-EU High-level meeting on Mobility held in Brussels allowed us to take stock of more than two years of activities and assess future priorities.

Both Armenia and EU view the implementation of the Readmission and Visa Facilitation Agreements as overall successful. We deem it important to start the Dialogue on Visa Liberalization with Armenia. Being well aware that Visa Liberalization Dialogue is a comprehensive process we also consider it as an additional incentive to foster reforms and cooperation with the EU in a number of areas.

Armenia is actively engaged with the EU in productive Human Rights Dialogue and attaches special importance to deepen cooperation on strengthening institutions and good governance, and in judicial, anti-corruption and public administration reforms. In this regard we are working closely also with other international organizations, namely with the Council of Europe. Two days ago we have launched the Action Plan for 2015-2018, which will be implemented also with the EU’s support. Armenia and EU is actively cooperating in parliamentary formats, Euronest and Parliamentary cooperation committee, as well as local government levels.

Armenia looks forward to advancing and deepening our comprehensive cooperation both within Eastern Partnership and European Neighborhood Policy, building upon the achievements that we have reached during recent years, in all possible areas and directions, giving due consideration to our commitments in other integration formats.